Siemens eHighway trial to take place in Germany next year 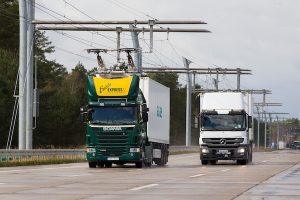 Engineering and technology giant Siemens is to build a 10km overhead contact line on the German motorway system to support electrified freight transport. The line will supply power to a hybrid truck in an initial trial taking place next year.

The system will be installed on the A5 Autobahn between the Zeppelinheim/Cargo City Süd interchange at Frankfurt Airport and the Darmstadt/Weiterstadt interchange.

Siemens will plan and construct the system as part of a joint project with Germany's Federal Ministry for the Environment, Nature Conservation, Building and Nuclear Safety (BMUB). The project, called Electrified, Innovative Heavy Freight Transport On Autobahns (Elisa), is based on Siemens’ original eHighway concept, introduced in 2012.

Next year’s trial will be the first time the eHighway concept has been tested on a public highway in Germany. Hessen Mobil, which is responsible for road and transport management in the German state of Hesse, will manage the project.

"Construction of the system will demonstrate the feasibility of integrating overhead contact systems with a public highway,” said Gerd Riegelhuth, head of transport at Hessen Mobil.

“The system will be used for real transport networks and prove the practicality of climate-neutral freight transport in the urban region of Frankfurt."

The system is based on an intelligent pantograph mounted on the roof of trucks to collect power and an onboard hybrid drive system. Trucks equipped with the system will run emission-free on electricity from the overhead line, automatically switching to their hybrid engine on other roads.

The latest announcement follows an eHighway trial conducted in Sweden in June last year, in which Siemens is working with truckmaker Scania; and the launch of an innovation partnership in January this year by the German and Swedish governments that aims to strengthen cooperation between them on the development and application of new technology in a number of areas, including electrified roads.