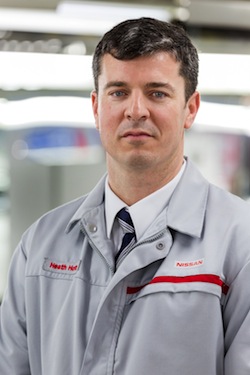 Nissan has appointed Michael Simpson as it vice-president of supply chain management for Europe replacing Heath Holtz, who has moved to a new role at Nissan North America as deputy managing director at carmaker’s Smyrna plant in Tennessee.

Simpson moves from his role as production control director at Nissan Motor Manufacturing UK (NMMUK). He will remain based in Sunderland in the new role.

Simpson has been with Nissan since 1995 when he started as a graduate production controller and has held a number of increasingly senior production planning and parts control management roles at the carmaker, mainly at the Sunderland plant. He became senior controller in 2005 and then manager in 2011. Nissan said he played a lead role in the carmaker’s European response to the Tohoku earthquake in Japan in that year.

Heath Holtz's new role at the Smyrna plant will put him in charge of all production and maintenance activity.

Holtz joined Nissan North America in March 2006 as manager of vehicle operations. Between then and July 2012, he held a number of positions including department manager, material handling, and senior manager, Americas logistics purchasing.

In July 2012 he moved to Japan as deputy general manager, and then to Sunderland to take up the role of vice-president, supply chain management, Nissan Europe, a year later.

Reflecting on his time in Europe, Holtz said: “It’s an exciting and challenging time in Europe. Sales and marketing have achieved record market share in Europe, and we’ve launched 12 new models across four production facilities. However, there are economic challenges in Russia, and the need to respond to changing demand.

“It’s been a great opportunity to work across many different cultures within Nissan Europe, and I’ve got many great relationships to take back with me to the USA.”