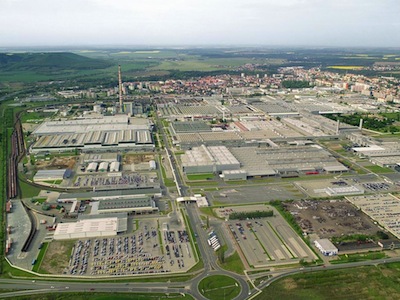 VW’s Skoda division has announced a series of logistics projects, designed to improve transport efficiency and reduce costs, that it said will be pioneered at its main production facility at Mladá Boleslav in the Czech Republic.

The first of three innovations devised by the company is the implementation of new transport containers for steering wheels. The container will allow up to 20% more space for the parts and has been designed to weigh significantly less – 62kg lighter – than the prior model. It will also be able to carry steering wheels for a variety of different models, something that was not possible before. The improvements in this one project alone have reduced the average cost of transporting a single unit by up to 40%.

An improved sequencing of the containers will also speed up the supply of the steering wheels to the assembly line.

A third innovation the carmaker has made is to improve the system for transporting components around the facility and to lineside, which has now been made fully automatic with the introduction of automated guided vehicles (AGVs).

“Powerful logistics is a precondition for top-level vehicle production,” said Michael Oeljeklaus, Skoda’s production and logistics board member. “The most recent innovations in our main production facility are an important step towards further optimisation of logistics processes and hence also towards increased efficiency and productivity during production.”

He added that by the end of 2018 the carmaker plans to increase its annual production to at least 1.5m units.