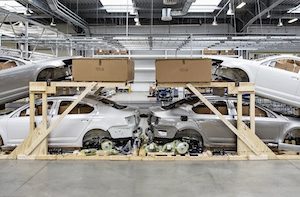 Škoda Auto has been recognised with a packaging award by the Czech Packaging Association SYBA for a recyclable wooden ‘cassette’ that can house four vehicle body shells in addition to various production parts.

The ‘4-in-1’ innovation, which was developed with Czech packaging specialist Pilous, is being used to ship body shells and parts between the carmaker’s plant in Mladá Boleslav in the Czech Republic and its plant in Aurangabad, India, which it shares with parent company Volkswagen. Škoda assembles the Rapid model there.

The previous container used by the carmaker held only three body shells. The addition of the fourth reduces the number of containers Škoda uses by a quarter and saves more than 800 tonnes of CO² a year across the 13,270km transport route, according to the OEM.

“At Škoda, we are constantly working on ways to make the logistics more efficient and therefore more environmentally friendly,” said Jiří Cee, head of brand logistics at Škoda Auto. “The area of logistics is fully committed to the objectives of the 'Green Future' sustainable development strategy. Our new 4-in-1 transport solution is an important step in achieving our ambitious environmental targets.”

The wooden constructs are purpose-built for each model series and designed to optimise the use of space in the container. Two body shells are arranged horizontally and two diagonally, with parts fitted into the available space between them (see picture).

Škoda has been refining the system over the last 16 years. The company said that originally, two vehicles were sent to India in each container but by 2006 that had been increased to three, with the added inclusion of all of the hardware needed for the final product. Developments based on field tests have now resulted in the implementation of today’s 4-in-1 transport system.

Škoda Auto organises all of its environmental activities under the umbrella of the 'GreenFuture' strategy, of which Green Logistics is one area.