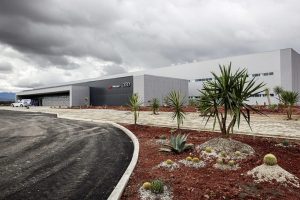 Audi has officially opened its $1.1 billion Mexican plant in San José Chiapa, in the state of Puebla, which is making the Q5 SUV model. Projected annual capacity at the plant is 150,000 units.

At the same time the carmaker has opened a supplier park next to the plant that will provide the just-in-sequence (JIS) delivery of parts from a range of suppliers. Seven companies are already on site. They include logistics providers Kuehne & Nagel and Syncreon, as well as Faurecia ET, HBPO, Thyssen Krupp Automotive, Truck and Wheel, and TI Automotive.

Audi’s board member for production and logistics, Prof Dr Hubert Waltl (also chairman of the board of Audi México) said the plant was a ‘prime example’ of the Audi Smart Factory, having been planned and designed for operation by computer simulation.

“We have optimised the entire process chain and put the plant into operation 30% faster than is usual,” he said.

Audi was able to build the assembly plant, including the press shop, body shop, paint shop and assembly line, in a record time of three and a half years. The plant covers an area of 400 hectares.

Localisation strategyThe adjacent supplier park, meanwhile, was built in conjunction with the plant and currently covers 26 hectares with scope for development over a total area of 60 hectares.

Audi said the short distances from the supplier halls into the production plant would ensure punctual delivery of parts for the Q5, conserve resources and reduce the burden on transport infrastructure in the region.

“The supplier park is an important element of our localisation strategy,” said Dr Bernd Martens, member of the board of management for procurement at Audi. “The short distances will foster rapid communications, efficient processes and smooth logistics.”

Manufacturing at the plant is built around those efficient logistics with all parts delivered for picking and sequencing to an on-site logistics centre, before moving directly to the adjacent assembly hall that has a central supermarket where kitting carts are filled and moved easily to the line.

Speaking to Automotive Logistics earlier this year, Peter Koltai, director of logistics and production control at Audi México, explained that having JIS suppliers next to the factory would make production more efficient.

“Material from suppliers is picked up with the same lorry and shunted over to one gate,” said Koltai. “We saved a lot of money [by] avoiding having many docking stations at the assembly building. Our processes also mean that we don’t need to use a forklift for JIS suppliers, as material moves straight out of the lorry directly to the point of use.”

Work on the park started in 2014 and it was developed in partnership with industrial real estate developer O’Donnell México.

“The supplier park right at the doorstep to the new Audi plant was a unique opportunity for us,” said David O’Donnell, president of O’Donnell México. “Here we could improve our clients’ competitiveness by establishing perfect infrastructure and advanced supply-chain logistics.”

Strong inbound networkAccording to the carmaker, more than 100 suppliers provide components for the Audi Q5 from locations in Mexico. The carmaker is receiving more than 70% of the purchased parts and components from suppliers in the NAFTA region but it plans to increase localisation as production continues.

Local transport infrastructure is of a high quality and the San José Chiapa plant has a rail yard that handles containers and vehicles. This is important given problems with infrastructure in other parts of Mexico.

Koltai also outlined the company’s development of a new inbound network, which is closely tied to how logistics work in the plant.

“We have had to build up nearly everything completely new, not only the factory itself but also the logistics chain,” he said. “That means creating a completely new network of inbound logistics because of the requirements of Audi’s in-plant logistics, as well as many aspects of the outbound network. We did this together with Volkswagen de México.”

Audi is responsible for its own strategies, order management and operations, but purchasing has been consolidated across the three Mexican plants within Volkswagen de México: VW plant in Puebla, the engine plant in Silao and the Audi plant which the new supplier park is supporting at San José Chiapa. VW’s US plant north of the border in Chattanooga in Tennessee completes its wider North American network.

The progress of developments in Mexico such as those at Audi’s plant in San José Chiapa will be discussed at the forthcoming Automotive Logistics Mexico conference in Mexico City at the end of January 2017.