So far so good for Ford shipments into Venice port 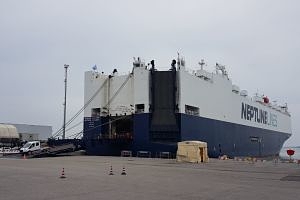 The addition of the port of Venice for imports of Ford Transit light commercial vehicles into Italy has gone “very well” according to the OEM’s manager of vehicle logistics for Europe, Torsten Heinrichs.

Back in April, Venice port announced that Neptune Lines had secured a deal with Ford to add the ro-ro terminal at Venice to its Adriatic weekly service.

Speaking at the Automotive Logistics Europe conference in June, Ford’s Heinrichs said three years of sales growth in Europe, coupled with expectations of further growth ahead, meant there was a need for smarter, more flexible networks to be put in place at the continent's ports.

“Not only are volumes growing overall, but also long-distance sourcing [of vehicles] is growing significantly,” said Heinrichs at the conference, referring to a growth in Ford imports into Europe from plants in South Africa, India and North America.

At the time, he said the decision to add Venice was a way of raising flexibility for Ford when importing cars into the country.

“The units were previously sent to Livorno. We have chosen an additional port to have more options as port of entry,” Heinrichs confirmed to Automotive Logistics last week.

He said the plan was to import about 8,000 units annually via the port, which is located on the north-east of the country, on the Adriatic Sea. The port of Livorno is on the west coast.

Since the first vessel arrived at Venice in March, about 2,600 vehicles have been handled at the port, said Heinrichs. All of these were destined for the Italian market and distributed via truck from the port.

“Venice does offer a very good infrastructure and we were able to set up an effective transport network from there,” said Heinrichs.