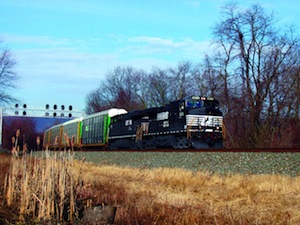 As North America’s leading rail providers publish their latest performance results, with volume and revenue increases recorded across the board, Norfolk Southern has reported an increase in the shipment of both finished vehicles and parts in the third quarter.

Automotive represents around 8% of the providers railway revenue, and it reports having moved more than 93,000 carloads for its automotive customers in the third quarter, an increase of 9% in volumes and 12% in revenue compared to 2012.

The company said this was attributable to an increase in the shipment of both finished vehicles and automotive parts, and as a result of new business and increased production at plants it serves.

North American light vehicle production was up more than 5% in the third quarter compared to 2012.

“We continue to see solid growth ahead as North American vehicle production is projected to increase significantly next year,” said Norfolk Southern’s spokesperson Robin Chapman, adding that the company was well-positioned to handle the growth expected in the automotive industry.

“Norfolk Southern continues to acquire new multilevel freight cars for finished vehicles, and very recently opened a new automotive distribution facility in the Birmingham market, both examples of our commitment to the automotive industry,” said Chapman.