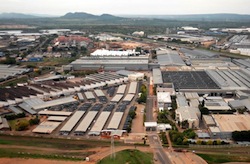 BMW’s production in Rosslyn has been affected by strike action since last week when 2,000 workers walked out over a shift allowance dispute. To date BMW has lost 1,600 units of production and could lose around 345 more units a day if next week’s action goes ahead.

“We are still trying to better understand the basis of the tabled shift allowance demand as BMW associates, working a 5-day week in a rotating 3-shift pattern, already earn more in terms of shift allowance than their colleagues working equivalent shift patterns at other OEMs,” a spokesman for BMW South Africa told Automotive Logistics.

He added that as the Rosslyn plant works on a 24-hour, 3-shift pattern, there is was no capacity or time to make up for the lost volume and that output would have to be reallocated to other plants around the world.

BMW builds the 3-series at Rosslyn, which it exports to the US, Japan, Taiwan, Singapore, New Zealand, Hong Kong, Sub-Sahara Africa and Australia. Last week BMW announced that it would introduce an export port in Mozambique to supplement volume out of Durban as exports were expected to surpass 60,000 units.

Next week’s action by NUMSA would risk losing even more production, said the BMW spokesperson, as the shift allowance will be covered under the new National Bargaining Forum agreement, which would be retrospectively applied from 1 July 2013 once its decided.

“If the NBF strike goes ahead, BMW Plant Rosslyn will lose an additional 345 units per day for every day the strike continues,” he said. “With almost 80% of Plant Rosslyn’s production destined for international export markets, industrial action of this nature dramatically damages South Africa’s reputation as a reliable production location.”

Speaking to the Reuters news service about the wider action expected next week, Alex Mahilo, NUMSA’s chief negotiator for the automotive sector, said the strike notice will be formalised on Thursday August 15th and the strike would continue until a wage settlement was reached. The union is seeking a 14% pay rise, which Reuters reports is well above the central bank's projected inflation rate for the year of 5.9%. Carmakers were only prepared to offer 6% during negotiations to replace a three-year wage deal ending on June 30th, according to Mahilo.

The strike could mean a loss of production and revenue across the car industry in country similar to that seen during the last strike by assembly workers in 2010, which lasted eight days.

South Africa is the largest car producer on the African continent and manufactures around 400,000 units per year, across 60 brands and more than 1,100 models. The industry accounts for the biggest manufacturing export activity in the country, at around 12%, and accounts for about 6% of the nation’s GDP.