South America summit: A region in dire need of a defibrillator 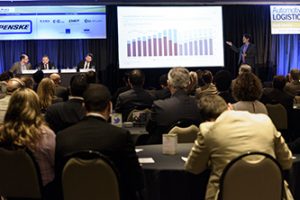 South America desperately needs the economic equivalent of a defibrillator to get its heart going again, delegates at this week’s Automotive Logistics South America summit in Brazil’s financial capital, São Paulo, were told.

Automotive sales in the region continue to stagnate, with consumer confidence at rock bottom because of political strife, corruption and economic uncertainty. And while there are recent glimmers that the market may be coming back from the dead, its recovery will be slow.

However, despite Brazil sliding from its position as the fourth biggest automotive production base globally to the eleventh, now is the time to instil new thinking in the supply chain and build in more efficiencies to make the most of the recovery over the next five to ten years, the summit heard. As GM’s Neuton Karassawa, logistics director for South America, put it: “Every time someone cries, someone else is selling handkerchieves.”

It is no wonder there are tears being shed, considering the bleak automotive production and sales figures in South America. This year is set to be the worst in terms of sales and production in the last decade, in fact, with Brazilian domestic sales expected to just about reach half of those in 2012 when they hit 3.8m units. Meanwhile, although Argentina is showing preliminary signs of recovery, it is expected to be slow and closely tied to Brazil’s ability to purchase its goods.

South America’s regional contribution to global automotive growth stands at 4.1% compared to the emerging Asia Pacific region’s 65.4%, according to figures from analyst firm PwC. Production volume is only expected to grow 0.9% between last year’s 3.1m figure and the 4m predicted for 2022.

Brazil accounts for 75% of South America’s total automotive output but, like sales, installed production capacity has almost halved, falling to 46% this year from 86% in 2010; when installed capacity falls below the breakeven point of 70%, companies begin to suffer.

In short, Brazil’s output has been put back a decade and its boom-time forecast of reaching 5m units by 2020 now looks just a pipe dream. Mexico has usurped it and is on target to make just over 5m units by 2020, a 50% growth rate based on its output last year.

Meanwhile, according to PwC’s director in Brazil, Marcelo Cioffi, it is currently impossible to make any accurate predictions about what the industry in Brazil will look like beyond 2022. At that point, the country will be 1m short of its original forecast at best, he noted.

On top of that, the country is still plagued by underdeveloped infrastructure, both inland and at its ports. Brazil languishes in 83rd place on the Global Logistics Index.

So what is to be done?

Export opportunitiesExport trade offers one obvious avenue of potential and Brazil has excess installed capacity following the investments of six years ago, making it well-positioned to grow. Cioffi said the call now was to look at bilateral contracts and exports.

“Unfortunately we have a lost decade when we look at the levels of 2013,” Cioffi told delegates at the summit. “The situation is now really complicated and the government has to think about this – exports may be a way out of the problem.”

That point was picked up by Ana Paula Quaresma, head of commercial for Latin America at Wallenius Wilhelmsen Logistics, the global integrated logistics and ocean services provider. “We know where the exports are and where the growth is, and that is where we need to be,” she said. “Our focus is on helping exports. We have an imbalance, but we can address this.”

Quaresma pointed to examples where growth could come for WWL, which even include the distressed high and heavy market in South America. She said Chile was showing positive signs in terms of vehicle purchasing and that construction, mining and agricultural developments were underway in Bolivia and Peru which could see used machines being moved there from Brazil.

One advantage of the tough lessons learned over the last few years is that there is a more realistic approach among companies operating in the South America region. “The advantage is that we know what is going on and we have reduced our expectations,” confirmed Alex Feijolo, director sales and marketing at transport and logistics provider, Gefco Brazil. “No one is making investments expecting a big return. The car industry is focused on new model development and looking at maintaining market share.”

Breathing spaceLow productivity levels and volumes in South America at the moment do also mean automotive companies have some breathing space to improve their processes, which is difficult to do during times of maximum output, added Marcelo Navarro, senior manager for MP&L Brazil at Jaguar Land Rover.

GM’s Karassawa made the same point, suggesting that this was the time to do something different, rather than complain and continue to drift in stagnant waters. He pointed out that the word ‘crisis’, as written in Mandarin, is made up of two ideograms – one meaning danger and the other meaning opportunity.

“This is the time to bring new ideas to the challenges we face,” he said. “The organisations themselves are open to new ideas at times of crisis. We do things that in normal situations, we would never think of. Now we have to be agents of change.”

For Karassawa, that came down to inspiring leadership that brought a sense of purpose to the job in hand. “Work with that in mind and it will permeate all parts of the organisation and you will be going in the right direction,” he advised.

It also came down to establishing clear roles for critical decisions and effective strategic planning supported by close analysis of the market and regular reviews of the business. But perhaps most of all it came down to planning, he stressed.

“We have to change the mindset that we are firemen responding to problems,” he said. “Dedicate time to redesign the model and look at how can we prepare before the regrowth.”

It is crucial to have the discipline to carry out plans drawn up at times of crisis because such plans are all too easily forgotten when the market returns to normal growth and old strategies emerge again, said Karassawa.

While Brazil is no longer in the leading group of emerging car making countries and the ‘B’ has currently fallen out of ‘BRIC’, sticking to the innovations that emerge from Brazil's current crisis could put it back there, he added.