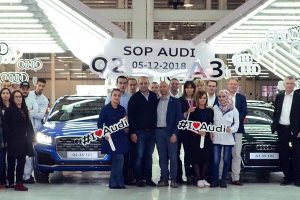 Audi has begun assembling vehicles at the Relizane plant run by its long-time Algerian partner, Sovac, from semi-knockdown (SKD) kits prepared at the OEM’s Ingolstadt plant in Germany.

“[All models] are built at the main plant in Ingolstadt and transported to Barcelona, where they are knocked down into individual assembly groups for sea transport to Algeria. Final assembly then takes place at the plant in Relizane,” an Audi spokeswoman told Automotive Logistics.

“We are establishing local production in order to maximise proximity to our customers and need the production capacity to satisfy demand on the Algerian market,” she added.

Audi has started by assembling the A3 Sportback, A3 Sedan and the Q2 at the Relizane plant in north-west Algeria. It initially plans to ramp up to around 3,000 cars a year.

Peter Will, the company’s head of planning and steering CKD/MKD/SKD projects, said: “This entry into the group’s multi-brand factory is a logical step into the Algerian growth market. By specifically training local employees, we are ensuring Audi quality and utilising synergies with the other group brands in production and logistics, laying the foundation for continued growth in North Africa.”

The Sovac Production SPA Algerie plant at Relizane began producing VW Group cars in 2017. Since then, production capacity has gradually increased to around 200 cars a day, with the VW Golf, Polo, Tiguan, Passat and Caddy, the Škoda Octavia, Rapid and Fabia, and the Seat Ibiza, Arona, Leon and Ateca models now assembled at the plant.

Sovac’s CEO, Mourad Oulmi, said: “We are very proud that we will produce premium automobiles for the first time with Audi in Algeria, thus meeting the demand from our customers. After more than ten years of partnership, we are entering a new era of co-operation.”

As majority owner of the Sovac Production SPA Algerie joint venture, Sovac has the right to appoint plant management and the executive board.

VW, which holds a minority interest in the joint venture, said Sovac was “a long-standing partner at our side that is intimately familiar with the Algerian market and the wishes of our customers there.”