Spain’s car and truck makers’ association ANFAC is projecting that vehicle production in the country will hit 3m by 2017. At a recent presentation of its forecast and ‘3 Million Logistics’ initiative, attended by Spain’s minister for transport, Ana Pastor, the association said that with more efficient logistics in place, the country could even reach production of 4m vehicles over the next five years. 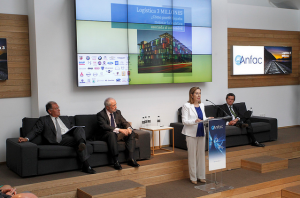 José Luis López-Schummer, ANFAC’s chairman and CEO of Mercedes-Benz Spain, said logistics was crucial to help maintain the country’s growth in manufacturing and its international ranking in terms of output.

Between January and May this year, Spain manufactured more than 1,194,000 vehicles and exported just over 975,000, according to figures from ANFAC. Europe accounted for 71% of those exports (and 83% of imported parts). Sales in the country have grown 22% in the first half of this year to reach 555,000, indicating the logistics demand both on inland and export movements.

To meet that demand, Spain is looking at greater use of short-sea routes and the rollout of mega-trailers of up to 25.25m and 60 tonnes, which would improve logistics savings.

José Manuel Machado, Ford of Spain’s chairman and chairman of ANFAC’s Logistics Committee, presented some key figures at the meeting and said that annual savings of up to €500m ($549m) were available to the Spanish automotive industry. The industry currently spends €3.5 billion on logistics.

Pastor backed up the points made by the association and said that the Ministry of Development was working with the Directorate General of Traffic to bring the standard on mega-trailer length into effect as soon as possible. Trucks with more capacity could bring savings of €165m a year for the Spanish industry as a whole, according to ANFAC figures.

Pastor said that the measure has the consensus of the transport sector and especially favoured the automobile industry, which she described as "one of the great engines of [Spain’s] economy."

According to industry figures quoted by the minister, the first five months of 2015 saw a 12% increase in annual production on last year, putting Spain as the world's eighth largest automaker.

The challenge, according to Pastor, was "to achieve a safe, multimodal, efficient and sustainable transport system", one that promoted coordinated transport chains that were responsive to the needs of companies operating in Spain.

She added that the implementation of the short sea strategy – Motorways of the Sea, which aims at introducing sustainable intermodal maritime-based logistics chains – was having a big influence on reducing logistics costs. Currently, 2m vehicles are moved by ocean to and from Spain.

In addition, better train access to ports promised savings of €35m, according to ANFAC, and Spain’s Ministry of Development is looking at the development of a new rail route into the port of Sagunto near Valencia to cite one instance. The rail development is part of a wider strategy to introduce a standard gauge on the Mediterranean Corridor. Currently 6,000 trains move every year carrying vehicles and components.

Machado concluded the presentation by saying that in 2020 Spain needed “efficient, global, flexible, innovative and excellent logistics to turn Spain into a global logistics platform."