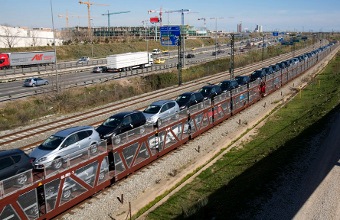 Recently released figures for car production in Spain in the first half of this year indicate that the industry is growing at a rate of just under 5%, which is being viewed as extremely positive given that the overall market in Europe had fallen by around 7% in the same period. Europe remains Spain's main export market.

At the same time there have been some significant developments in the provision of rail services for vehicle movements between Spain and wider Europe, including a new deal between SNCF Geodis and Comsa Emte, and a new service provided by Transfesa to the port of Valencia.

With the arrival of the economic crisis, plants in Spain have sought out new markets, targeting the likes of Russia, Algeria, Turkey and Mexico. Spanish plants are regarded as being amongst the most competitive in Europe thanks to two factors: their flexibility and overall production quality.

Between January and May, production in Spain was up by 5.88% to 828,008 units, equivalent to 87% of total production being exported.

However, forecasts suggest that it will not be until 2017 that total output will return to the previous figure of 1m units, with government incentives to scrap older vehicles helping to ramp up production. At the end of October Spain’s government offered its fourth such incentive programme in a year, a €70m extension to the existing programme designed to boost car sales in the recession hit country. The €1,000 subsidy on new fuel efficient cars priced at €25,000 or less must be matched by a discount from the dealership.

Trains arrive at the Fuente San Luis logistics centre from where they are then shunted across to VTE.

The trains, which operate out of the city of Zaragoza, consist of 20 transporters with a capacity to handle 240 units. The idea is to operate the train on a weekly basis.

This is the first time that VTE, which belongs to the Italian-based Grimaldi group, has handled trains on this route, with terminal sidings able to accommodate two such trains of up to 700 metres in length at any one time.

Significantly, Valencia Port Authority (APV) forms part of the public-private consortium that was recently awarded a contract to manage the Zaragoza Plaza Rail Logistics Centre. This move forms part of APV's strategy of extending its hinterland through equity stakes in inland logistics facilities. Furthermore, in the last 10 years, APV has invested more than €10m in upgrading rail infrastructure.

The new rail service between Zaragoza and Valencia forms part of the European commission's TEN-T rail/short sea shipping policy, given that, from Valencia, finished vehicles will be dispatched to Italy, thereby relieving congestion on roads between the two countries.

SNCF Geodis and CRT
Further rail developments are ahead following the European Commission’s go-ahead for a deal between SNCF Geodis, the transport and logistics division of French rail provider SNCF, and Spanish rail company Comsa Emte. The contract, which was initially announced in May, will see SNCF Geodis take a 25% stake in Comsa Emte’s transport division Comsa Rail Transport (CRT). The Commission said the transaction would raise no competition concerns because the merged entity will have very limited combined market shares.

The companies will collaborate on the development of rail freight traffic between France, Central Europe and the Iberian Peninsula, including an international gauge extension and the provision of new infrastructure on the Mediterranean corridor between Algeciras in southern Spain and Perpignan across the border in southern France.

The growth of the business will also be driven by VIIA, the rail motorway business of SNCF Geodis, which is currently reviewing the feasibility of extending the Bettembourg (Luxembourg)-Le Boulou (France) link to Spain. VIIA was formed by the merger of the company’s Lorry Rail subsidiary and Autoroute Ferroviaire Alpine. The service transfers trailers between road and rail.

Both SNCF Geodis and Comsa Rail Transport provide rail services for finished vehicles and parts shipments, the latter handling the movement of vehicles between the Seat factory in Martorell and the port of Barcelona. The combined expertise following SNCF Geodis’ stake in Comsa Rail Transport promises to provide more efficient services for carmakers shipping vehicles and parts between Spain and Europe.