Spanish ports hit as stevedores go on strike over liberalisation 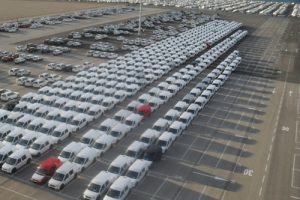 Spanish ports have been hit by country-wide strike action by more than 6,000 stevedores protesting about new laws that have technically liberalised dock services and ended the mandatory employment of unionised labour.

The action is taking place at 39 cargo ports around the country and affecting parts movements in and out of the country, as well as the movement of finished vehicles.

While the proposed reforms have left finished vehicle stevedores out of the deregulation process, throughput at the car terminals is affected and processors are now dealing with disruption and a two-tier policy related to competition and employment. Stevedores are reported to be 'working to rule' and low productivity is causing congestion and disruption to vessel schedules.

All carmakers with facilities in the country have already taken the precaution of switching some volumes to overland modes or speeded up ocean shipments ahead of the strike..

A spokesperson for Spanish carmaker Seat said that in the last few days, vehicle distribution had been expedited to accommodate the vehicles that could not be sent by sea during the strike, with some put into temporary storage facilities at the Martorell plant. However, Seat was keen to stress that it was not unduly affected by the strike.

“What we are doing is to speed up our logistics processes to some countries where cars are moved by ocean,” said the spokesperson. “For example, [we are] sending cars to Mexico faster than we usually do [and emptying] the temporary storage facilities we have at the Martorell plant, so that we can use this space during the strike.”

Other carmakers are also prioritising and rescheduling ocean bound car volumes to avoid coinciding with the programmed strike days.

Nine days of strike action began on Monday (June 5th). They will take place on alternate days over the next three weeks. Even on the days being worked, a 'go-slow' approach is being applied, according to some terminal operators.

The strike action had been delayed during recent negotiations following the approval in May by the Spanish government of a reform eliminating the need for loading companies to join a port consortium. This will eventually end the monopoly of unionised workers, of which there are 6,000, in the provision of loading and unloading services.

The move by the government under prime minister Mariano Rajoy rests on an earlier European Court of Justice Ruling that found Spain's regulation of dock services, which forces companies to hire workers from the union, violated the freedom of establishment protected by EU treaties.

Ocean forwarders providing finished vehicle services have welcomed the move to reform the sector, saying it would bring greater efficiency to the movement of cargo.

A spokesperson for short-sea ro-ro operator UECC, said: “It will be much better from an economic point of view and also from a flexibility point of view, and it will bring more efficiency.”

Faced with the prospect of prolonged strike action, UECC would have to potentially omit Spanish ports and cargo from its scheduled calls, he added. “We can't cripple our entire network.”

Any moves to manage vehicle flows out of adjacent ports are likely to fall foul of consensus action by other stevedores.

“We have talked about neighbouring ports but there will be sympathy strikes if we do that,” confirmed UECC's spokesperson. “I think it is going to spread, so even if you went to a French neighbouring port, the French stevedores would sympathise.”

Spain's dock workers have been seeking job protection from employers following the government's ratification of the reform and initially a compromise was reached under which companies would offer job guarantees in exchange for wage reductions. Since then, however, both sides have backed away from the agreement.

Although legal, it was not supposed to be compulsory for unionised stevedores to load and discharge new vehicles. Spain's Ministry of Transport had to derogate from the law to obtain sufficient parliamentary voting support to approve the more liberalised stevedoring regulation.