The majority of EU member states are still dragging their heels when it comes to the adoption of digital freight transport documents, despite the signing of a protocol back in 2011 that paved the way for their adoption, attendees at a dinner debate on digitalisation in logistics were told last week at the European Parliament in Brussels. 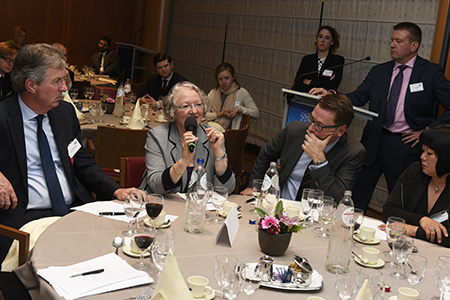 As a result, logistics companies are wasting hundreds of tonnes of paper a year and ignoring the greater efficiency that electronic consignment notices promise to bring to an industry under constant price pressure.

The event, which was organised by the Association of European Vehicle Logistics (ECG), was attended by carmakers, LSPs, and members of the European Parliament (MEPs). Michael Bünning, managing director of German logistics firm BLG Automobile Logistics and an ECG board member, explained that his company moved close to 1m vehicles a year on the roads, generating around 2m pieces of paper. Looking only at the 16.5m new vehicles expected to move across Europe this year will generate around 135 tonnes of paper.

“We are transporting many more goods every day and I’m afraid we need a large forest to make our freight documents,” he said. “This is not necessary any more. These days we have all sorts of technical solutions to do it state-of-the-art.”

One of those solutions is an electronic version of the CMR (the consignment note with a standard set of transport and liability conditions required by the Convention Relative au Contrat de Transport International de Marchandises par Route). Bünning noted that in 2011 there was an additional protocol to the CMR convention that organised and regulated the use of it electronically – the e-CMR waybill (the same is true for other modes, including rail). However, so far only eight EU countries (out of 28) have ratified the protocol, along with Switzerland (which is not in the EU) – Germany is not one of those eight.

Political reluctanceBünning suggested this was down to a lack of political pressure and appealed to those gathered at the meeting to make sure the protocol was ratified by every EU member state, adding: “We don’t need a patchwork, we need an EU-wide, quick solution”.

He was backed by the German liberal MEP, Gesine Meissner, who admitted that member states were reluctant to adopt the new process. “Talking about electronic documentation in logistics generally between the different modes of transport causes people fear and maybe that is why member states are so reluctant,” she speculated.

Meissner rejected suggestions, however, that adoption of an electronic system might threaten employment. “People are scared of digitalisation because they think they could lose their jobs,” she acknowledged. “But I am convinced that, if you save money, for instance, or time through certain processes, you have that money and time to implement in other sectors. I don’t fear that employment will be affected. We need to explain and try to show solutions and new ways of going forward.”

Army of the willing Sean Kelly, the leader of Ireland’s Fine Gael party in the European Parliament, asked what targets were being put before the member states to encourage them to get over their reluctance, but the discussion failed to throw up any clear answers.

Désirée Oen, deputy head of the cabinet of transport commissioner Violetta Bulc at the European Commission, said she could only count on the “the army of the willing”, which she said was growing. However, she admitted that EU member states took anywhere between five to seven years to ratify legislation that had to go through “core decision processes”.

Damien Viccars, Brussels representative of the World Shipping Council, pointed out that his sector had also had to contend with the Reporting Formalities Directive (RFD) over the last 12 months. This aims to simplify and harmonise the administrative procedures applied to maritime transport by establishing standard electronic transmission of information and by rationalising reporting formalities for ships arriving in and departing from EU ports.

“We have got to deal with stubbornness in the member states sometimes to adapt systems according to a common pattern that is Europe-wide,” he added.