The UK's rail network authority – Network Rail – has re-established a link to the port of Sunderland in the northeast of England that will provide a boost to its import and export capabilities, something the port hopes will allow it to undertake more projects for key players in the region's expanding automotive sector. 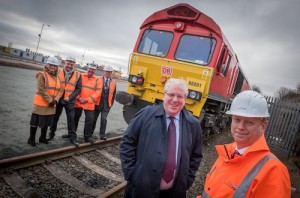 It is the first time in more than 20 years that the port has had a rail freight link and Network Rail has spent £600,000 ($913,000) in reinstating the line into the port to boost freight operations.

"Port of Sunderland is at the heart of a region that boasts an ever-growing cluster of automotive suppliers and, of course, the only UK region with a positive balance of trade," said Matthew Hunt, director at the port of Sunderland. "The role we are now able to play in the passage of parts and raw materials in and out of the region, thanks to the enhanced connections our restituted rail line gives us, means that we are in a fantastic position to take advantage of the growth the Northeast's automotive supply chain has seen," he told Automotive Logistics.

Sunderland is home to Nissan's plant, which is the largest assembly plant in the UK. A large number of suppliers have invested in plants and logistics centres in the region. Only last month, automotive components supplier Calsonic Kansei announced it had invested £800,000 ($1.2m) in establishing a 9,300 sq. m warehouse at Doxford International Technology Park in Sunderland, UK.

The newly reinstated line will allow up to five trains a day to operate into and out of the port, connecting it to the East Coast mainline, and from there to the wider rail network and mainland Europe via the Channel Tunnel.

During his visit to the port last week the UK's transport secretary Patrick McLoughlin saw a trial run of a Class 66 locomotive on its newly connected rail line organised by rail freight provider DB Schenker and Network Rail.

According to Hunt the opportunities offered by the automotive sector for the port are vast, as more automotive suppliers set up local facilities in support of growing production in the Northeast.

"It means that Sunderland is very much blazing a trail in the automotive sector, and we're keen to play a part in its success," he said. "We do hope that the added connectivity provided by our rail links allows us to do that."

The port offers an alternative to the nearby port of Tyne, which handles a lot of automotive traffic. In 2013 Renault Nissan Alliance made the port of Tyne its common entry point for vehicle imports to the UK, including for Nissan, Infiniti and Dacia models.