Supply Chain Conference: Carmakers to benefit from greater use of intermodality 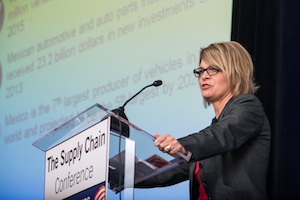 The levelling out of car sales in North America and the reordering of production locations is giving carmakers the chance to make the delivery of their materials more efficient and sustainable, mainly through the greater use of intermodality, with rail as a core element.

According to PWC Autofacts sales look to be primed for another historic year in 2016. However, this is expected to be the high water mark for the remainder of the decade. At the same time there is a shift in the business the rail companies are seeing from different sectors, largely thanks declines in the coal business of around 40%, which is putting more capacity at the disposal of the automotive industry.

“We have found that, due to decreases in other sectors, there is a lot of capacity out there and performance has been strong,” said Wendi Gentry-Stuenkel, head of inbound logistics and auto transportation at Fiat Chrysler Automobiles (FCA, pictured), speaking at this weeks inaugural Supply Chain Conference in Atlanta, US. “So where I can guarantee a service level for the customer, why not do it? [Rail] is inexpensive and great from a sustainability perspective, which is really important to us.”

After a decline in 2014 following network wide disruptions for North American rail, FCA has increased its use of rail and intermodal for its inbound supply chain, from 39% in 2014 to 44% in 2015. That is expected to continue rising through 2016 – especially with the shift in production of the replacement for the Jeep Compass and Patriot from Ohio to Toluca, Mexico, together with more stable production. Previously, the fast rebound the industry has experienced over the last few years has seen transport managers resorting to mode combinations that may have not been the most efficient, simply in order to keep up with the urgent supply of parts, the levelling out of the growth means that now, greater efficiencies are available.

However, what also underpins this move to greater intermodal efficiency is having robust networks and strong partnerships.

“You have to build a partnership with your competition,” noted Gentry-Steunkel. “You have to be willing to do it. And that comes down to individual relationships. You need willing partners. That becomes our frontier.”

It remains a frontier and an opportunity because large amounts of the logistics network are still not being shared, at least from an OEM perspective. Logistics and transport providers such as Ryder, however, are already embracing it in the booming Mexican market.

“In Mexico all of our network is multi-client,” said Juan Calvillo, director of supply chain excellence at Ryder. “We are serving other industries as well. In the automotive spare parts distribution network we are using the same trucks to handle different clients; there is a willingness to collaborate.”

Cavillo said that third party logistics providers were best placed to provide assistance to their OEM customers when it came supporting the greater efficiencies that come with shared loads.

This makes sense given that carmakers use many of the same suppliers, something Gentry-Steunkel pointed out.

“I am going into the very same suppliers that many of my competitors are,” she said. However, so far there has been relatively limited sharing of logistics networks and flows across different brands.

“We are already doing some of that but the next horizon is actively managing the relationship,” she continued. “We set it up in the beginning but I'm not seeing the level of active management that is necessary in a dynamic environment.

"If we want to get to the next level it requires a lot more collaboration on a continual basis, on a weekly basis, not annually. And that is where efficiencies will come from,” concluded Gentry-Stuenkel