Representatives from carmakers, tier suppliers and the dealership sector were amongst those warning of the enormously disruptive impact of continued import tariffs in the US. Last week’s US Senate Finance Committee hearing in Washington, DC heard that duties on vehicles and automotive parts into the US, as proposed by the Trump administration, were putting investment and jobs at risk. The hearing was held as part of an investigation by the Department of Commerce into whether imports of automobiles and automotive parts threatened national security. 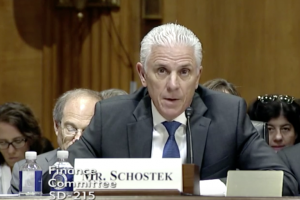 “The supply chain, their customers, and the jobs they support are highly interdependent,” said Michael Haughey, of the North American Stamping Group (NASG), who was speaking at the hearing on September 26. “Like a stone in a pond, one small change to the chain can cast off multiple ripple effects.”

Haughey cited a couple of major disruptions to affect the automotive supply chain in recent times, including the Sendai earthquake in Japan and the fire at the Meridian Lightweight Technologies plant in Michigan. He said they showed how the US vehicle industry relied on both its global suppliers and its local domestic component manufacturers. “Disruption to one implies disruption to all,” he said.

On the same theme Rick Schostek, an executive vice-president of Honda North America, (left) commented: “No matter how short-lived, [tariffs] are enormously disruptive to the stability of a business and reduce the value business can provide to customers and contribute to society.”

“The labour and material content of each component is also carefully managed to maximise performance while minimising cost to ensure that the ultimate price of the vehicle will meet the needs of our customers,” he told committee members.

Threat of underinvestmentSchostek said unanticipated disruptions such as new taxes in the form of tariffs represented an unplanned addition to the cost and process of building a vehicle that was not factored into the business plans of manufacturers and suppliers. He said the added costs would either be passed on to our customers or borne by manufacturers, something that diverted money intended for other critical purposes, including investment in future technologies, or capital improvements to operations.

Once production of a model has started, manufacturers cannot readily change suppliers to mitigate the added cost of tariffs, Schostek told the hearing. “Business agreements with suppliers generally cover several years of production. Further, it takes time for a manufacturer to qualify a part from an alternative supplier as well as ascertain their ability to supply that part in the quantity and schedule required,” he said.

Also taking part in the hearing was Steve Gates, principal dealer of the four-generation Gates Auto Family, which has outlets in Kentucky, Indiana and Tennessee.

He said tariff-related extra costs extended into the aftermarket and had safety implications.

Owners needing to repair their vehicle would “feel the pain” of 25% auto tariff because more expensive parts will drive up the cost of maintenance, he told committee members.

After citing an Auto Care Association estimate that each US household will spend an extra $700 per year in increased ownership costs, he said: “Current car owners unable to pay the higher prices an auto tariff would bring to our service centres will likely put off needed repairs and safety improvements, making for a dangerous situation for them and others on the roads.”

As parts become pricier, insurance premiums will go up as insurers cover their higher costs, he added.

Steel and aluminium tariffsThe automotive industry has had first-hand experience of higher tariffs this year: President Trump’s 25% import duties on steel, 10% on aluminium and then retaliatory levies on auto parts as ‘trade wars’ broke out.

In his opening remarks, committee chairman Orrin Hatch said import duties on steel and aluminium cover almost $50 billion worth of goods. The downstream cost of the steel and aluminium tariffs has added an estimated $400 to a new car; a 25% tariff on finished vehicles would raise the price of an average imported car by as much as $6,400.

Honda’s Schostek told the committee: “[That] is bringing an array of unanticipated harmful effects that would only be magnified by tariffs on automobiles and auto parts. For example, more than 90% of the steel used to produce our vehicles here is sourced in America. So, while we’re paying relatively little in the way of tariffs on steel, the price of domestic steel has increased as a result of the tariff, saddling us with hundreds of millions of dollars in new, unplanned cost.”

Haughey said its costs had increased by more than $10m because of the steel tariffs alone.

“As a supplier, NASG is unable to pass steel price increases to tier one customers and vehicle manufacturers, regardless of whether the higher price was due to tariffs or increased prices as the domestic steel producers inflate prices.”

To mitigate the consequences, NASG has reduced overtime, put hiring on hold, reduced capital expenditure and cut all discretionary spending. “The decisions of NASG have been repeated throughout the supply chain,” he added.

The US is also imposing tariffs on a range of automotive goods coming in from China, with the latest announcement of an additional 10% tariff on $200 billion affecting a wide range of goods.

The US may be one of the world’s major car-manufacturing regions, but “tariffs on motor vehicle parts will jeopardise the vehicle industry’s growth and success and, more importantly, the US jobs and American innovation that comes with trade,” he said.

“The US cannot simply stand on its own and manufacture the most fundamental components as well as the newest advanced technologies and remain competitive in a tariff-compulsory environment. The supplier industry has long urged this administration to consider alternative policies and actions instead of tariffs to encourage and retain the development and deployment of the newest innovations in the United States.”

Haughey then referred to what rarely is mentioned alongside tariffs and trade wars: the pace of technological change. He said advanced vehicle safety and efficiency systems required substantial development costs and US investment and research over the next several years could well determine the country’s global leadership in transport and technology for generations to come.

“The United States has long been a leader in innovation,” said Haughey. “However, the imposition of trade-restrictive actions, like tariffs or quotas, on vehicle parts manufacturers will put these US investments in jeopardy.”

Tariff-free successThe hearing was told of an economic success story, aided by tariff-free, open trade policies, by David Britt, chairman of the economic and development committee in Spartanburg County, South Carolina, which faced thousands out of work and economic decline when its textile mills began to close in the 1990s.

“The transformation began in 1992 when BMW decided to build its US manufacturing facility in Spartanburg. In the last 26 years, BMW has invested over $9.3 billion in [the Spartanburg plant], and has produced over 4m vehicles, over 70% are shipped all over the world,” he said.

For every 10 direct jobs at the plant, 90 more are created elsewhere in the US, according to a 2017 study he cited.

Toward the end of his address, Britt said: “We are poised for even brighter days to come provided these tariffs do not put their foot on the throat of growth.”

Citing other industry surveys, he added such a levy on auto parts would increase the manufacturing cost of a passenger vehicle in the US by about $2,000 and cost 195,000 jobs.

“That’s before other countries retaliate, which could put over 600,000 US jobs at risk. These tariffs could cost the US auto industry up to 2m lost vehicle sales annually,” Hatch said.

Car dealer Steve Gates called on lessons to be learned from history.

“The United States has experimented with auto tariffs in the past, and it is still affecting us negatively today. In 1963, President Lyndon B Johnson signed Presidential Proclamation No.3564 in response to Europe imposing a tariff on chicken imports. Among the items included in the list of retaliatory tariffs was a 25% tariff on imported trucks, and it is the only one on the list still implemented today.

“That’s why I can’t sell a Hyundai or an Audi pick-up truck at my franchises. The 25% ‘chicken tax’ on trucks limits choices for consumers and increases costs. And now we’re talking about doing it to every motor vehicle and all their parts. That is what I consider a real threat.”