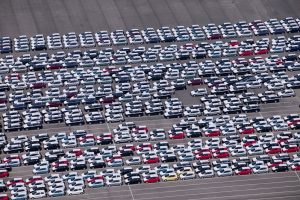 Last year the Spanish port of Tarragona increased vehicle handling by almost 40% on 2015, thanks in part to an increase in volumes on the connecting rail network. It has now granted the vehicle terminal operator Bergé y Cia an additional 135,000 sq.m for vehicle handling activity at the port bringing its footprint there to more than 160,000 sq.m

Figures for 2016 show that throughput of vehicles through the port reached around 152,400 units with a substantial increase of over 42% in the number of vehicles imported compared to the previous year, equal to more than 111,000 vehicles. Exports, meanwhile, climbed almost 15% to 41,360.

Josep Andreu i Figueras, executive president of the Port of Tarragona confirmed that this was the best year for vehicle handling the port has seen in the last five years.

That increase is in part due to the port’s intensive use of rail, according to Figueras, who said that the port had built rail infrastructure into the port which was well connected with the hinterland to provide a fast and efficient service

“The internal rail network of the port of Tarragona and its connectivity with the terminals is unique in Spain undoubtedly making it an important element of competitiveness,” he said.

Competitive pricing and a high ranking on the quality of services for traffic have also attracted business according to the port.

In 2016 Spain’s association of automobile and truck manufacturers (Anfac) again placed the port as the best valued for car traffic, with 4.3 points out of a maximum score of 5. Furthermore, in its Valuation Report for Maritime-Port Logistics 2015, which Anfac published last September the Port of Tarragona as once again placed first alongside the ports of Santander and Valencia for the quality of their transport services.

That has a lot to do with the quality of the terminal facilities that Bergé’s two divisions at the port maintain. Bergé Maritima provides services including loading/unloading, ship consignment, and importation and exportation. Bergé Automotive Logistics (BAL), meanwhile, handles the storage operations, inspection, pre-shipment and value-added services at the port.

“The BAL facilities in Tarragona are a differentiating factor when it comes to attracting customers, both in factory services as in intermodal connections,” said Figueras. He added that, as an integrated logistics provider, Bergé was able to focus on the domestic market and offer customers door-to-door services.