Indian vehicle maker Tata Motors has appointed TML Truck Rus as the official distributor of its commercial vehicles in the Russian Federation. 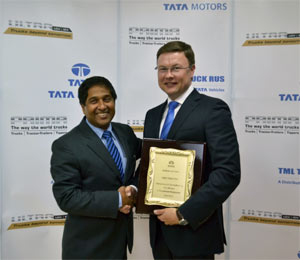 TML will import vehicles and service parts, and establish exclusive brand outlets in Moscow and St Petersburg for light, medium and heavy commercial vehicles. It will also set up a warehouse for aftermarket parts supply according to Tata. The company expects to have the full operation rolled out, including 60 additional sales points across the country, within the next five years.

“As a leading truck and bus manufacturer worldwide, we at Tata Motors are proud to announce the appointment of LLC TML Truck Rus as a significant step towards establishing the Tata Motors name in Russia,” said Tata’s RT Wasan, head of international business – commercial vehicles. “Through this signing we are committing to a strong, long-term partnership with all our customers in Russia, with a range of world class quality products from the Tata Motors portfolio and backed by premium quality service and parts support from TML Truck Rus."

The Russian distributor is based in Kazan in the Tartarstan republic.

"While Tata Motors' trucks have been selling in Russia for a while now, we hope to further engage with the Russian customers in offering a comprehensive Tata Motors vehicle experience, backed by a world-class sales and service set-up across the country,” said Albert Yagudin, Commercial Director at TML.

Tata announced its return to the Russian market in February this year. As well as light and medium duty trucks and buses, the company is rumoured to be including its Tata Novus range of heavy commercial vehicles manufactured by the South Korea-based unit – Tata Daewoo Commercial Vehicle Company – which was bought from Daewoo in 2004.