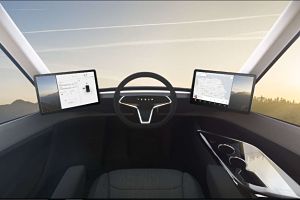 Tesla has revealed that the longer range version of its new electric Semi truck will cost just 50% more than a regular long-distance tractive unit – much less than many market commentators had been expecting.

Tesla claims its new truck can be run at half the energy costs of a comparable diesel vehicle and that the fuel savings will contribute towards a two-year payback for the new truck.

Those wanting to get their hands on the initial 1,000 'Founders Series' versions will need to pay $200,000 straight away, even though the truck is only expected to go into production in 2019. A ‘standard’ version can be reserved for $20,000, meanwhile.

Tesla founder Elon Musk unveiled the Semi – a Class 8 truck he has nicknamed ‘The Beast’ – at an event in California last week.

While a number of companies including retail giant Wal-Mart have said they will be among the first buyers of the truck, Tesla itself is likely to be the first to start using it on runs between its facilities.

Speaking at the recent Transport and Logistics conference in the Netherlands, Jerome Guillen, Tesla's vice-president of truck programs, reportedly said the company would be its own first customer, using the trucks to carry components from its Gigafactory in Nevada to its manufacturing facility in Fremont, California.