The new industrial age – are you prepared?

The impact of automation on society in general and on industry in particular – especially the automotive and logistics sectors – is growing, suggests Dr Julian Francis (pictured) 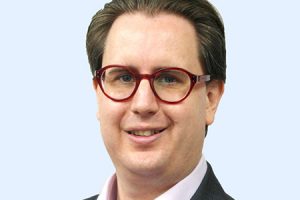 In Britain and all over the Western world, large numbers of people feel the system is no longer working for them. Globalisation has driven a wedge through our society and for every person who benefits from it, there is someone else who loses out.

The recent ‘Brexit’ vote by the UK to leave the EU has highlighted this reality in such a way that we can no longer ignore it. There are many people in our population, both in the UK and elsewhere, who believe that immigration is of no benefit; that globalised trade and global corporations have removed their control over their own lives and made them pawns in a game that does not work for them; and that the quantitative easing brought in by the central banks has simply inflated the prices of assets other people own while making them and their families poorer.

The rate of technological change is further exacerbating these problems in our new industrial age. Technical innovation and social change go hand in hand – you can’t have one without the other.

One example of this interdependence can be seen in the changes happening in the automotive sector, where the growing move from petrol- and diesel-driven vehicles to electric ones has had a profound effect on the automotive supply chain.

As electric vehicles have fewer moving parts and are more durable, the market for vehicle servicing and parts supply is beginning to suffer. Fewer parts now need to be stored on site at dealerships and automation in logistics means goods can be more effectively shipped from central supply depots to other parts of the world. All of this means automotive companies are re-examining their dealership networks, supply chains and staffing levels, while technology drives contraction in this area that will further impact on blue-collar jobs.

The anger people feel is the fuel that is feeding the rise of radical, anti-establishment political movements such as those embodied around the world by the likes of Trump (in the US), Wilders (in the Netherlands) and Le Pen (in France). In its left-wing form, it has brought us Bernie Sanders and Jeremy Corbyn (in the UK) and back in June, this anger helped the ‘Leave’ campaign to win victory in the UK’s Brexit vote. In her speech on the steps of Downing Street and in the speech she gave in Birmingham just before the dramatic collapse of the Tory leadership election, Theresa May said she was “at the service of ordinary, working people” and in highlighting those people who can only just manage, she took aim at exactly the right audience.

The urgency of this effort is impossible to overstate. Every one of the factors squeezing the unhappy middle-income household and the young people who find themselves worse off than their parents is accelerating. Japanese-style economic stagnation is spreading to other economies, particularly in Europe, and the huge numbers around the world who aspire to move to richer nations are growing rapidly.

At the heart of this social change is a technological revolution that is every bit as transformative as the industrial revolution was. The significant change that has happened in the last few years, however, is the segment of society that stands to be affected. In the late 20th century it was blue-collar, manual labour that bore the brunt of technological change with the collapse of mass-labour manufacturing industries. This led to a loss of low-skilled jobs that devastated whole areas of countries like the US and UK. But in this latest phase of industrial development, it is the white-collar workers feeling the pressure of changing practices brought about by technological innovation.

The bad news for such people is that the pace of technological change seems set to change up a gear with the arrival of artificial intelligence – computers which learn as they go along and have the potential to disrupt or make redundant the jobs, training and qualifications of hundreds of millions of people. One assessment is that we are on the brink of a change that will happen at 10 times the speed and with 300 times the scope of the Industrial Revolution itself. 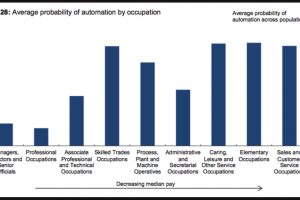 Charting the effectsThe chart to the right, produced by the Bank of England, shows those areas of employment that are most likely to be affected by automation. As it shows, the pain is starting to be felt by sections of society that once thought themselves immune to globalisation and automation. More livelihoods are going to be upset, more professions transformed, more skills made obsolete and more new ones required than ever before in the history of the human race. From the car that drives itself to the robot that provides a company’s security and audits its accounts at the same time, new devices are going to present not just an important scientific event, but a transformational political one, too.

The risk is that such a change will divide society further into those who master it and those who are at its mercy. The disappearance of the steady, routine job will be a disaster for vast numbers of people, who consequently will be angrier still. The challenge set by the UK's Prime Minister is, therefore, even more urgent, more important and more difficult than it might seem.

Industries such as automotive and its supply chain have an important role to play in this transformation and can help the government meet its objectives. Not only do we build the infrastructure that will be vital for economic growth going forward but we also provide skilled jobs that currently cannot be done by robots. As an industry, we are reeling from the implications of smart technology and 'Big Data' and trying to determine how such factors will fit into the office and projects of the future. Yet, at our heart, we are still people-businesses that are dependent on their workforces as the primary – indeed only – asset. Understanding the pressures on our workforce will be key to succeeding as commercial concerns.

Successful firms will be the ones that treat their employees as partners and ensure they share widely in success. This is the only way the anger that is fuelling our current political uncertainty can be dissipated. Big businesses specifically, but not exclusively, have to reform their operating practices and embrace new ideas to ensure they remain thrusting, innovating, risk-taking users of new technology and ideas.

Dr Julian Francis is director of policy and external affairs at the Association for Consultancy and Engineering, a London-based group representing the views of the consulting and engineering sectors, including the development of infrastructure.