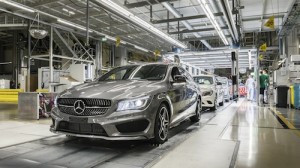 Daimler’s Kecskemét plant in Hungary has started making the Mercedes-Benz CLA Shooting Brake this week, the third model to be produced at the plant since it opened in 2012, and the second to be made there exclusively following the CLA-Class, which was rolled out at the beginning of 2013. The plant also produces the B-Class (which is also made in Ratstatt, Germany).

In total, around 150,000 models were manufactured there last year and around 300,000 units have rolled off the line at the Kecskemét plant since it started production. According to the company, almost the entire output at the plant last year was exported.

The company has not revealed the production capacity planned for the CLA Shooting Brake for 2015 or how many vehicles it expects to export, but did state that the first models will be arriving at European dealerships in March 2015.

The top five markets for the model globally are Germany, Italy, Japan, the UK and France.

Since 2013, the carmaker has been transporting most vehicles built in Hungary to Germany by rail, including shipments to Bremerhaven for export, and estimates making annual CO2 savings of up to 60,000 metrics tonnes in doing so.

The carmaker has also had success in exporting to the US using this link, with the CLA Class having almost doubled unit sales there last year to 27,000 vehicles.

This is all helped by the contract it signed in 2013 for manufacturing in Hungary, which sees Mercedes-Benz benefitting from a low-interest export promotion loan totalling €90m ($104m), which the company said it will use for financing further investments in the Kecskemét plant in the future.

On the inbound side, the addition of the third model at the plant has been made without any significant disruption to processes.

The Kecskemét plant continues to work with five logistics providers that handle the different functions: incoming supplies by train or truck; processing empty containers; sequencing parts; and shipping finished vehicles. Those providers have not changed since 2013 and comprise Duvenbeck, Kühne+Nagel, Panopa, Lagermax and Rhenus Logistics.

Investments in the Kecskemét plant to date total around a billion euros. After spending €800m on the construction of the plant, the company has continued to develop the facility. That included preparation last year for the production of the CLA Shooting Brake.