ThyssenKrupp adds to parts production in China and Hungary 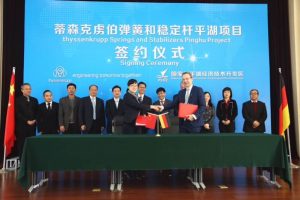 German tier supplier ThyssenKrupp has announced plans to build two new plants in China and Hungary to manufacture more than 11m springs and stabilisers a year.

In China, the group will begin construction this year of a factory in Pinghu, near Shanghai, with output starting in 2018. The site will produce 5m springs and stabilisers a year for customers including European, American, Japanese and Chinese vehicle makers.

ThyssenKrupp is investing around €30m ($32.3m) in the new factory, which will create up to 200 jobs and will be its third springs and stabilisers plant in China.

This is not the only new factory it has under construction in China. In December last year, it announced plans to centralise electric power-assisted steering system production activities at a new €200m manufacturing plant in Changzhou, Jiangsu province.

The group has also announced that work will start on a new factory in the eastern Hungarian city of Debrecen in the second quarter of this year, which will produce more than 6m coil springs and stabilisers a year for European OEMs and other customers. The plant, which involves a capital cost of around €35m, should create around 250 new jobs by 2020, it said.

Thyssenkrupp is already building a further €100m plant at Jászfényszaru, 70km east of Budapest, to manufacture electric power-assisted steering systems and cylinder head covers with integrated camshafts, where production will start next year.

Hungary is an attractive location for such plants because in the past four years, car production in the country has more than doubled, reaching 500,000 light vehicles in 2016, said the company.

Investment in new production facilities in China will be among the core themes at this year’s Automotive Logistics China conference, taking place from April 11th to 13th in Shanghai.