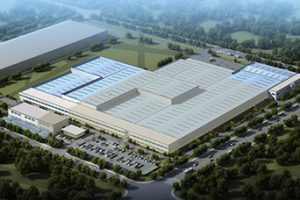 German tier supplier ThyssenKrupp has confirmed it will move all of its Chinese steering system production activities to its new manufacturing facility in Changzhou (pictured), in central eastern China’s Jiangsu province.

The German conglomerate is spending €200m ($213m) on the plant, which will have an annual capacity of around 4m electric power-assisted steering systems – all of which will be reserved for the Chinese market.

Up to now, its steering systems for the Chinese market have been produced at sites in Shanghai and Changchun, in Jilin province, northeast China.

Series production of electric steering systems started at the new site in the second quarter of 2016 while output of net-shape, cold-forged steering parts will begin in the first quarter of 2018.

The new plant will eventually create around 800 jobs, said the company.

Chinese OEMs are playing an increasingly important part in ThyssenKrupp’s business mix in the country.

“In addition to the big international OEMs, we are also supplying more and more components to Chinese carmakers,” confirmed Dr Karsten Kroos, CEO of the company’s components technology business area. “In the steering business alone, our portfolio of Chinese customers has more than doubled in recent months.”

The Changzhou site will be a fully digitised production operation, providing complete traceability of both inbound and outbound parts and systems, said a company statement. It will bring the total number of automotive component plants ThyssenKrupp operates in China to 10.

Earlier this year, the company announced a €70m investment in a power steering production plant in Puebla, Mexico, which will produce around 1.4m electric power-assisted steering systems a year by 2018 for the North American and German markets. It has also recently announced a €100m investment in a new factory in Jászfényszaru, Hungary, to make electric power-assisted steering systems as well as cylinder head covers with integrated camshafts.