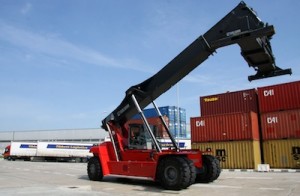 Tibbett Logistics has reported a substantial increase in the uptake of its intermodal logistics services in Central and Eastern Europe through 2014, with a 50% increase in container handling at its Bucharest International Rail Freight Terminal (BIRFT) in Romania compared to the same period last year.

The company said that both import and export volumes from forwarders, shipping lines and direct customers had increased.

BIRFT handles block train services for containers between the Romanian port of Constanta on the Black Sea and the capital Bucharest. It also handles rail wagon traffic from Western Europe through its rail-linked warehousing, as well as European intermodal traffic.

Earlier this year the terminal also started trials with vehicle rail wagons bringing in Renault vehicles from Turkey and returning them with Dacia vehicles produced in Pitesti, which is 100kms from the rail freight terminal.

“Given the strategic location of BIRFT relative to the rail infrastructure, the Terminal is perfectly positioned as a transit point to the Black Sea and Turkey – an area that has been identified for substantial growth," said Tibbett Logistics' CEO, David Goldsborough.

Tibbett, a subsidiary of the UK’s Keswick Enterprises, now operates three block train services in each direction weekly between Bucharest and Constanta port, with a fourth set to be added shortly.

The company has also started moving inbound raw materials for three automotive manufacturers in the Bucharest and Ploiestic regions according to Goldsborough.

At the same time Tibbett has registered a tenfold increase in conventional freight brought in from Western Europe for cross docking through its rail linked warehousing.

“The developments on the regular link with Western Europe… are based on the requirements of a small group of customers with large volumes, one of which is from the automotive sector and has around 30 loads a week destined for Germany and Belgium,” Goldsborough told Automotive Logistics.

Last month Tibbett Logistics also announced it had quadrupled the size of its automotive logistics operations in Bucharest following the addition of 2,000 sq.m of warehousing space at its facility in the Romanian capital.