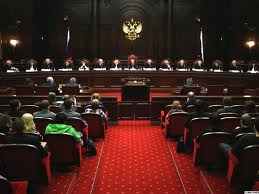 The Russian supreme court has ruled against legislation passed recently in the country that imposed international road transport restrictions on a number of countries. The decision, which was announced this week, has ruled that the Federal Customs Service of the Russian Federation’s restrictions were illegal and invalid.

The FCS RF’s earlier decisions this year had restricted foreign carrier operations using the so-called TIR carnet. Those restrictions had been met with dismay by many in the logistics industry, particularly by the Association of International Road Transport Carriers (ASMAP). The court decision is supposed be enforced with immediate effect.

The Transport Internationaux Routiers, or TIR, has been in operation for over 60 years and is an international customs transit system, allowing goods to travel from their country of origin to their country of destination with customs-control recognition along the supply chain.

The system has been meant to reduce delays and costs involved in international transit and encourage the smooth passage of global trade. In the past decade, around 3m billeted TIR permission forms were granted, incorporating countries from all over the world. The TIR serves as the only global customs transit system to date.

The system has been regularly used to transport automotive components as well as finished vehicles from Europe and Centra Asia to Russia. The restrictions have put limits on foreign trucks moving in and out of the Russian Federation.