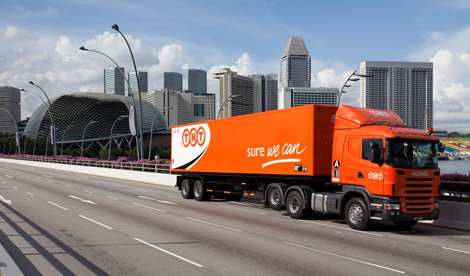 TNT Express has reported improvements to its business in the fourth quarter of last year, swinging back into profit for the quarter despite lower revenues. The company saw its profits fall for the full year 2013, but plans to accelerate its cost-cutting initiatives and reorganise its domestic and international logistics management.

Results were dragged down by weakness in southern Europe, where Italy proved particularly problematic. Other markets where TNT has domestic logistics operations in Europe and Latin America were boosted by cost controls. Brazil has shown particular signs of improvement, with revenue up nearly 14% in 2013 and operating losses improving from €66m in 2012 to €27m last year. The improving revenue and cost picture is part of what has led TNT to a reverse earlier plans to sell its operations in Brazil.

In terms of strategy, TNT gave details of its Outlook initiative, encompassing plans for improved performance, which will integrate its established Deliver! plan to improve profits, something the company stated had achieved €25m in savings in the last quarter.

Spearheaded by the company’s CEO, Tex Gunning, and overseen by the supervisory board, Outlook aims to focus on profitable growth through the expansion of the European road network. TNT hopes that by increasing contribution from four priority industries, one of which was automotive, more could be delivered and moved by road. There will be country-specific strategies for France, Italy, the UK, Brazil, Chile, and the Pacific region, as well as a new management structure.

“We have taken the time to carefully assess the company’s competitive position, service to customers, productivity and organisational effectiveness,” said Gunning. “The conclusions are clear. We have distinct areas of strengths but also need to make substantial improvements. Building on our strengths, our vision is to be the ‘fastest and most reliable’ European road delivery company.

He said that Outlook comprised a detailed agenda designed to realise that goal and meet the expectations of its customers, employees and shareholders. This was based on three priorities: “an absolute focus on profitable growth, making a step-change in reliability and productivity, and organising ourselves to be more nimble and accountable.”

One of Outlook’s key priorities was to transform IT potential and thereby expand the scope of global business centres.

In the second half of this year, TNT plans to adjust its organisation, with one team leading international express activities across Europe, and another overseeing Asia Middle East and Africa. The domestic road networks in France, Italy, the UK, Brazil, Chile, and the Pacific region will also be grouped into a separate management cluster.

TNT also announced a reshuffle in its top leadership team, adding six appointments. Gunning and CFO Bernard Bot will be joined by Marco van Kalleveen, a strategy and turnaround specialist previously at McKinsey, who takes up the role of managing director domestics and chief transformation officer.

"We have a lot of work ahead but together with this experienced top team and each and every one of our dedicated employees around the world, I am sure we will succeed,” said Gunning.