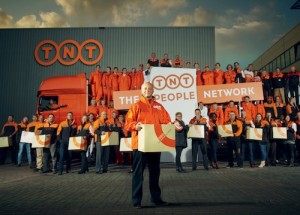 Global logistics provider TNT has said it is revising its forecasted 8% operating margin for 2015 in light of deteriorating trading conditions in Europe and increased competitive pressures. At the same time the company has launched a new brand identity, with a redesigned logo and the addition of the strapline ‘The People Network’, which it said emphasises the importance of customer relations and would be rolled out across the company’s divisions over the next three years.

TNT said it had based its performance forecast on an economic growth rate in Europe of between 2-3% but that since its interim results were published at the end of July, trading in Europe had declined and it was “no longer prudent” to stick to its 2015 guidance. Adjusted operating income in the second quarter results stood at €82m ($103m). A revised figure is expected when the next results are published on 27th October this year.

Nevertheless, the company’s CEO, Tex Gunning, was confident in the results expected from the roll out of its Outlook programme, which includes a range of cost-cutting and investment initiatives.

"Whilst it is clearly disappointing to see that wider trading conditions within Europe have remained challenging, we are confident that TNT is on the right track to create a sustainable business with good value creation opportunities for its shareholders,” said Gunning. “The implementation of the Outlook program, which includes ongoing ‘Deliver!’ savings, has started and is solid, but it will realistically take 3-5 years for the full benefits to come through.”

Service quality a priority
TNT said it was focusing on three initiatives now, including profitable growth through a focus on small-to-medium enterprise (SME) customers and selected verticals, including automotive. Improving service quality is seen as the first priority according to the company.

“While we cannot change the economy, we can improve our service and focus on our strengths,” a spokesperson for the company told Automotive Logistics. “TNT's European road network comes first in mind. We want to make substantial improvements in our infrastructure to increase productivity, capacity and service levels. By investing in our road network and bringing in new technology, we will be able to provide customers with better road transit times and morning delivery capabilities in Europe, while reducing unit costs.”

Asked about the impact on the automotive sector of the investment programmes and cost reduction initiatives the company has planned, TNT’s spokesperson pointed to the quarterly cost savings the company has made since the third quarter of last year. He said that a large part of those cost savings were related to the restructuring of TNT and a reduction in headcount, in support functions and clerical roles.

“We need to further reduce costs by increasing productivity and accuracy,” he said. “Getting things right the first time is less costly. This requires investments in our road network and IT infrastructure.”

TNT announced that productivity gains would come through automation and service improvements supported by its ‘Perfect Transaction’ and ‘Perfect Depot’ initiatives, as well as IT support systems, something that would benefit all industries, including automotive. The Perfect Transaction initiative in particular aims to improve all processes, including initial discussions with customers and order-to-invoice.

The company is also creating three “value-creation business groups” under its Organise to Win initiative – European Express, Domestics, and Asia and Middle East – each supported by its global networks.

TNT said it would be providing a full update on the progress it had made with its Outlook strategy as well as its expectations for future progress at its Capital Markets Day, to be held on 18th February next year.

Logistics is a people business
Regarding the rebranding the company spokesperson said the campaign is designed to reach out to SMEs in general rather than a particular industry sector.

“We want to introduce more customers to the brand and highlight our two most valuable assets: our people and our network,” he said.

In a statement Gunning said: “We have a clear strategy to focus on our greatest strengths; our people, their human approach to serving customers, and our unique network. Customers are not barcodes and we are not robots. We all relate to what drives our customers, business growth. The personal touch and taking time to understand what customers really need, distinguish us from others.”

In other news, TNT has entered a settlement with the French Competitions Authority following an investigation into alleged anti-competitive behaviour in the French parcels sector. The exact cost of the settlement is not expected to be known before the end of 2015 but TNT said it was making a financial provision of €50m in the third quarter.