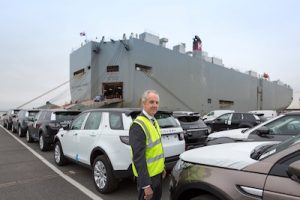 The Bristol Port Company in the UK has appointed Tony Dent to the newly created role of director - automotive trade. Dent moves from his role at the company as car trade manager. He has been overseeing car operations there for 12 years and prior to that worked in forest products and containers for the company.

“I am delighted to be taking on this new role which demonstrates the high priority Bristol Port places on responding to the needs of our automotive customers,” said Dent. “Bristol’s major advantage for the automotive supply chain is that we have so much space to offer for importers and exporters. The available land, coupled with our responsive management and proximity to markets, enables us to respond flexibly to customers’ changing lead-times and their requirement for continuous quality improvements.”

Bristol port forecasts it will handle over 600,000 cars, vans and high and heavy units this year, with a split between 75% imports and 25% exports. The deep-sea port offers 200+ hectares of vehicle storage compounds, a vehicle rail terminal and direct motorway and rail access to the rest of the country.