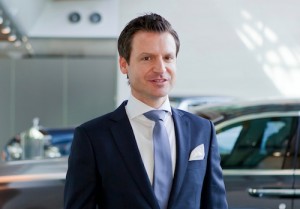 Henrik Wilhelmsmeyer (left) is moving from his role as regional director for Rolls-Royce’s operations in China at the beginning of September to take up a new position with BMW’s Mini brand based in Munich, Germany. Details of Wilhelmsmeyer’s new responsibilities will be announced closer to his appointment.

Wilhelmsmeyer has held a number of senior roles in China for BMW and was previously responsible for BMW imports into China, as well as dealer development.

In an indepth interview with Automotive Logistics magazine last year, he talked about how Rolls-Royce ensured premium delivery of vehicles and spare parts to China.

Leon Li, who has led a number of sales regions in China for BMW since 2007 and is currently head of North Region, is taking over the regional director role at Rolls-Royce.

In another move at BMW, Graeme Grieve is taking up the role of managing director at BMW Group UK and Ireland from 1 October 2014. Grieve is currently based in Munich and responsible for the BMW Group Importer business covering more than 80 countries around the world.
In the UK he succeeds Tim Abbott who has been appointed as managing director, BMW Group South Africa where he will lead activity at the Rosslyn plant, the national sales company and BMW Financial Services.