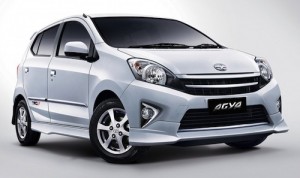 Toyota and Daihatsu have started exports of a compact car based on the Toyota Agya from Indonesia to the Philippines.

The Agya, which was developed and produced by Daihatsu, has been sold in Indonesia as the Agya (Toyota brand) and the Ayla (Daihatsu brand) since September last year.

The vehicle is produced by Daihatsu’s Indonesian subsidiary, PT Astra Daihatsu Motor (ADM), but will be sold in the Philippines under the Toyota brand by Toyota Motor Philippines Corporation (TMP). Initial export volume is planned at approximately 500 units a month.

At an export ceremony held in Jakarta on Monday (February 3), Daihatsu’s executive vice president Tatsuya Kaneko said: “We are confident that Philippine consumers will be satisfied with this environment-friendly and affordable compact car. By being the first to export a low cost green car vehicle, we are very pleased to contribute to the Indonesian automobile industry through the advancement of vehicle exports.”

Also at the ceremony, TMC Managing Officer Hiroyuki Fukui said: “With exports including engines and CBU vehicles to more than 80 countries and regions, Toyota and Daihatsu consider Indonesia a vital global manufacturing and supply base.