Toyota and Mazda choose Alabama for US joint venture plant 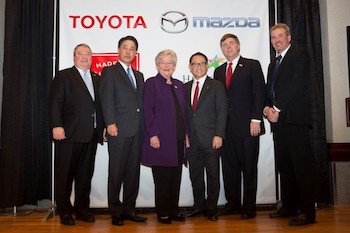 [UPDATE] Toyota and Mazda have chosen Alabama for a new $1.6 billion plant they will run together, which will make 300,000 vehicles a year. The investment will be split evenly between the two Japanese carmakers.

The plant in Huntsville, where Toyota already has a large engine plant, will benefit from an existing network of more than 150 tier one and two automotive suppliers across Alabama. Production at the new plant is expected to begin by 2021.

“Our investment to establish a new vehicle assembly plant with Mazda builds on the strong success we have enjoyed in Alabama where we produce engines for the North American market,” said Akio Toyoda, president of Toyota at the official announcement on Wednesday (January 10th). “Starting from 2021, I’m confident that we will run a highly competitive plant, by bringing together the expertise of Toyota and Mazda as well as the excellent Alabama workforce. We are committed to being another ‘best-in town’ company in the city of Huntsville and the state of Alabama, a new hometown for Toyota and Mazda.”

The move stems from an announcement last year when the companies formed a ‘capital alliance’ to make vehicles for the North American market at a new plant in the US. Toyota said it would make the Corolla at the plant, while Mazda said it expected to make crossover models on a separate production line at the facility. Toyota currently builds the Corolla at its Blue Springs plant in Mississippi and at the Cambridge plant in Ontario.

Speaking about the decision to establish a car plant in his state, Alabama governor Kay Ivey said: “The partnership between Mazda and Toyota will expand innovative automotive manufacturing in Alabama,” Governor Ivey said. “Their decision to locate this new facility in Huntsville is a testament to the talented workforce in our state. We are proud that this partnership puts Alabama on the forefront of technology in this dynamic global industry."

The announcement of that alliance followed earlier statements in 2015 when the two companies said they were working on a long-term, wide-ranging partnership. Under the agreement, Mazda’s plant in Salamanca, Mexico, already produces the Mazda 2 and 3 models, as well as the Yaris for Toyota.

Toyota previously announced it would build a manufacturing plant in the Mexican state of Guanajuato to build the Corolla for the North American market. The carmaker’s plans in the country came in for criticism at the beginning of last year from Donald Trump, who emphasised that carmakers should build in the US. Toyota was already doing so and had also announced plans to build a $1.3 billion plant in Kentucky, part of a $10 billion investment over the next five years that was announced in January 2017.

Toyota is continuing with its plans to build in Guanajuato but will produce the Tacoma pickup at the plant, rather than the Corolla, something that is expected to delay the plant’s opening.