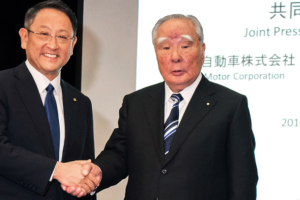 Toyota and Suzuki have signed a memorandum of understanding to explore potential cooperation in various business areas including the supply of products and components.

In October last year, the two Japanese companies first announced an intention to collaborate in areas such as environment, safety and information technology.

Under the memorandum signed this week, further progress was made to “begin concrete examinations toward the realisation of business partnership” in the areas previously mentioned, as well as in the “mutual supply of products and components”.

In 2015, Toyota and Mazda entered a partnership agreement. That deal targeted products and technologies, with the aim of creating more “appealing cars that meet the diverse needs and tastes of customers all over the world”.

That agreement has yet to come up with any concrete collaboration although in November a Mazda executive said discussions were ongoing.

In January 2016, Toyota acquired the remaining shares in compact carmaker Daihatsu for $3 billion, gaining full control of the company.

Suzuki and Toyota have just released financial results for the nine months to the end of December. Suzuki’s major sales market continues to be India, which accounted for half of the total 2.1m cars it sold globally in the period. Japan was second highest at 441,000 units.