Toyota begins Highlander exports from US to global markets 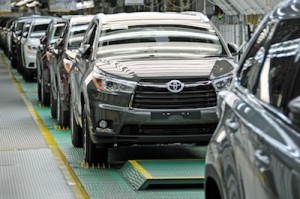 Toyota has begun exporting Highlander SUVs from the US to Australia, New Zealand, Russia, Ukraine and Kazakhstan – the first time the model has been exported from North America to those markets. Previously exports of the Highlander to those markets were supplied from Japan.

The vehicles are manufactured at the carmaker’s plant in Princeton, Indiana, and the export volumes are enabling Toyota Motor Manufacturing Indiana (TMMI) to increase local production and maximise the use of plant capacity in the US.

“We are proud that the US-built Highlander has garnered so much interest not only here, but abroad,” said Bob Carter, senior vice president of Toyota Motor Sales USA, speaking at the Chicago Auto Show. “The export of Highlander SUVs to Australia, New Zealand and Eastern Europe helps maintain Toyota’s strong, stable base of US jobs, and is the result of the great work of our talented US team members and our extensive investments across North America. We look forward to other opportunities to continue expanding exports from our US operations.”

As previously reported, Toyota began building the 2014 model year Highlander at the Princeton plant in December last year following a $430m expansion at the plant. As a result of the Highlander exports, Toyota Motor Manufacturing Indiana (TMMI) will increase production by 15,000 and raise the plant’s annual capacity to 365,000 vehicles by late 2014. It also makes the Sienna and Sequoia models. Including the previous version of the Highlander it made a total of almost 300,000 vehicles at the plant last year.

For volumes destined for Australia and New Zealand Toyota is using Norfolk Southern for rail forwarding to the Dundalk terminal at Baltimore. Wallenius Wilhelmsen Logistics (WWL) is handling processing at the port (through its VSA division) and onward ocean transport to seven ports in Australia and two in New Zealand.

For those volumes being moved to Russia and its neighbouring states the company will be moving volumes by rail to Brunswick for shipment to Zeebrugge in the Netherlands using ocean carrier “K” Line. Toyota is again using Norfolk Southern on this route as well as terminal railroad provider Golden Isles. IAP will be handling the processing at Brunswick.

This is the first Toyota is using rail direct routes to the ports (Venza shipments, which began last spring, are taken by rail to Jacksonville for onward road transport to Brunswick).

Toyota began exporting US-assembled vehicles in 1988, and now exports them to 32 countries around the world. The main markets are in Canada, Mexico, Central America, the Caribbean, South America the Middle East, Asia Pacific and Europe. Last year exports reached more than 130,000 units, a 5% increase on 2012 and an all-time high for the carmaker.