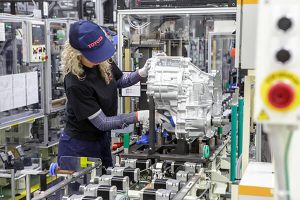 Japanese OEM Toyota has started manufacturing the fourth generation of hybrid electric transaxles at its TMMP plant in Wałbrzych, Poland, the first factory outside Asia to make the component.

Polish-made transaxles will be shipped to the company’s car plant near Derby, in central England, for use in the hatchback, wagon and touring sports versions of the Corolla hybrid, and to Toyota’s Turkish plant at Arifiye-Sakarya on the Black Sea coast, for fitting into the sedan variety of the Corolla hybrid and the C-HR hybrid.

The expansion in production of a core element of Toyota’s hybrid powertrains is mainly to meet continued growth in sales of hybrid vehicles in Europe, a company spokeswoman told Automotive Logistics. Toyota’s target is for hybrids to account for 50% of all the vehicles it sells in Europe by 2020, including the Lexus brand, from a total of 46% now. The move also reflects Toyota’s strategy of producing as close as possible to end markets, she added.

“The capability of our employees at both [of our] plants in Poland and their quality performance demonstrate our ability to localise hybrid production in Poland,” she continued. “Two years ago, we merged both Polish Toyota plants to strengthen our production foothold in Poland, making it even more competitive. The announcement of start of production of the hybrid transaxle is a concrete benefit of this decision.”

The spokeswoman declined to say who would be providing logistics services to support the site.

Toyota has invested €67m ($76.3m) in Wałbrzych on the production of hybrid electric transaxles, which coordinate electric motors with the combustion engine. The outlay is part of €1bn-plus the company has invested, or plans to invest, in Toyota Motor Manufacturing Poland (TMMP). The latest round of investment will create around 600 jobs.

The OEM plans to produce 10,000 transaxles by the end of this year at the Wałbrzych site. Annual production capacity will be 180,000 units, based on a three-shift system with a maximum daily output of 750 transaxles. The spokeswoman said actual production would depend on demand, however.

“It’s too early to disclose total production volume at TMMP in 2019, including manual transmissions and engines produced by the plant,” she added.

Other developments taking place at TMMP include production of the company’s new 1.5-litre and 2.0-litre TNGA (Toyota New Global Architecture) engines at the Jelcz-Laskowice plant.

“Toyota is considering also further localisation of hybrid powertrains, but no final decision has been made yet,” the spokeswoman commented.

The latest developments in automotive logistics in Central and Eastern Europe will come under the spotlight at the inaugural Automotive Logistics Central & Eastern Europe summit, taking place in Hungary on November 13-14.