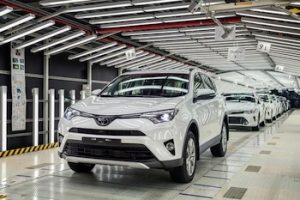 Toyota has begun producing the RAV4 compact SUV at its plant in St Petersburg alongside its ongoing production of the Camry sedan there, following an investment of 9.7 billion roubles ($149m) to double plant capacity. The move was originally announced in March.

Previously the RAV4 was imported into Russia as a finished vehicle from the carmaker’s Tahara plant in Japan, as well as from the Nagakusa plant run by Toyota Industries, also in Japan.

Toyota said the RAV4 was the market leader in the compact SUV segment in Russia and had also become one of its best sellers across all segments there. Last year, it sold more than 27,100 RAV4 units in the country, while in the first half of this year, sales reached almost 16,200.

Following Toyota’s investment, production capacity at the plant has grown from 50,000 vehicles a year to 100,000.

“We invested in equipment to double the production capacity with a view towards the mid-to long-term prospects of the Russian, Belarus and Kazakhstan markets,” said a spokesperson for Toyota. “Both in case of the Camry and RAV4 at this moment we use various in-house parts and parts purchased from local suppliers, including interior parts and exterior parts, and we are looking at opportunities for expanding our local supplier base.”

The RAV4 will now be distributed within Russia and to Kazakhstan and Belarus, which are part of the Customs Union with Russia. The first RAV4 rolled off the line this week, while the Camry has been made there since 2007.

Toyota has not confirmed which transport provider it is working with for the distribution of vehicles to the Customs Union markets.

“The RAV4 launch at Toyota’s plant in Saint Petersburg is key to Toyota’s sustainable development in Russia, as well as our contribution to the regional and Russian economy,” said Hidenori Ozaki, president of Toyota Motor. “The successful implementation of our company plans to start second model production confirms our commitment to promote the development of the automotive business in Russia and to offer products which are fully in line with the needs of Russian customers. We are confident in the future success of our Toyota RAV4 in Russia.”