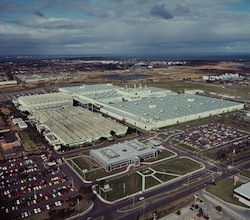 Toyota’s division in Australia has said it will reduce production at its Altona plant near Melbourne because of a drop in export orders. Exports account for 70% of total production output from the plant, which makes the Camry, Camry Hybrid and Aurion sedans, mainly for the Middle East markets.

This year those exports dropped by 5,000 vehicles. The plant will now reduce daily production volumes from 470 to 431 to account for the drop to match demand. The company said such fluctuation was a reality when building vehicles to order.

“This year we had actually forecast an increase in production of around 109,000 vehicles,” said a spokesperson for the Toyota Australia. “This number has now been revised to around 104,000 vehicles. Last year we built around 101,000 vehicles.”

The carmaker will not be making any changes to its outbound logistics planning or contracts. Ocean forwarders NYK and K Line take the vehicles to the Middle East.

However, Toyota said it would be “making up to 100 voluntary redundancies” at the plant, which currently employs 2,500, from permanent and that there would be no compulsory job losses. Those 100 staff would leave by the end of November this year, said the company.

“As a manufacturer we are subject to fluctuating orders from our domestic and export markets, so we need to have the flexibility to respond to changes in conditions,” said president and CEO of Toyota Australia, Max Yasuda. “We will now be working closely with all of our employees to ensure they understand why we have made this decision and support them during this difficult period.”

Earlier this year both Ford and GM announced they were ending production in Australia. Ford, which will end production in 2016, blamed manufacturing costs and market fragmentation, while GM said the business was not financially viable.

Toyota said that its domestic production remained a focus and that it had no plans to pull production out of the country.

“Our domestic sales are on track this year [and] it is our vision to continue building cars in Australia,” said the spokesperson.