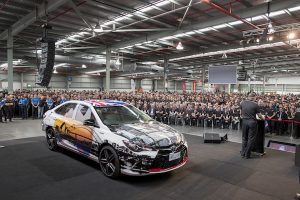 After making nearly 3.5m cars there over more than half a century, Toyota has ceased vehicle production in Australia.

The carmaker held a ceremony on Tuesday to mark the closure of its Altona plant, near Melbourne, where the Camry, Camry Hybrid and Aurion models have been made. At the event, which featured a ceremonial Camry Hybrid as the last car off the line (pictured), Toyota Australia’s president Dave Buttner said the carmaker would continue to be “the leading automotive brand in Australia”.

"Toyota will maintain a sizeable presence in Australia,” said Buttner. ‘The company will continue to provide the Australian market with a diverse range of high quality vehicles, which I have no doubt will exceed expectations."

Buttner said Toyota would retain approximately 1,300 local employees (from 4,000) and would maintain its existing dealer network of more than 270 sites. Those dealers will now be supplied with vehicles from overseas plants, including Toyota’s plants in Thailand which already export Australia’s best-selling vehicle, the Toyota Hilux. Its Gateway plant in Thailand also makes the Camry.

Sales of Toyota vehicles in Australia are not the reason behind the closure; it is more to do with the expense of making vehicles there. Up to 70% of output from the Altona plant is for export, mainly to Middle East markets, but along with other carmakers with plants in the country, Toyota has decided that manufacturing there is no longer cost-effective.

It is unclear at this stage from which plants the Middle East market will now be supplied. A spokesperson said that for the meantime Toyota would use existing inventory from Australia.

The carmaker announced it would end production in Australia back in 2014, restricting its business from the end of 2017 to national sales and distribution of imported models. Toyota Australia’s chairman, Max Yasuda, said then that there were too many factors beyond its control that made it unviable to build cars in the country.

Ford ended production in Australia last year and GM’s Holden division is expected to also stop production this month, following an announcement it made at the end of 2013.

The appreciation of the Australian dollar and its impact on exports, high manufacturing and labour costs, and low economies of scale have all been cited as factors by OEMs in their decision to withdraw production from the country.