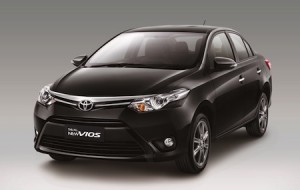 Toyota’s production subsidiary in Indonesia – PT. Toyota Motor Manufacturing Indonesia (TMMIN) – has officially launched the beginning of exports of the Vios sedan from its facility in Karawang to a number of Middle East markets, as well as Singapore. A ceremony was held this week to mark the occasion attended by Indonesia minister of industry M.S. Hidayat, Indonesia minister of trade, Muhammad Luthfi, and Toyota executives.

Trial shipments began in December last year to Singapore and Brunei Darussalam. These have been expanded this month to Bahrain, Kuwait, Oman, Qatar, Saudi Arabia, United Arab Emirates, Jordan, Lebanon, and Yemen. Exports will begin at 1,000 units a month, to be increased to 3,000 units in the near future said the carmaker.

“This achievement speaks highly of the more than 7,600 amazing team members at Toyota in Indonesia whose hard work and determination have enabled us to reach this historic day. It’s a proud day for us all,” said TMMIN president director, Masahiro Nonami.

Annual production capacity in Indonesia has increased to 250,000 vehicles this year from 110,000 vehicles in 2012. In addition to established production of the Innova and Fortuner TMMIN now makes Etios Valco, the Vios and the Limo.

“Toyota considers Indonesia as a key global manufacturing and supply base. I am very proud that Toyota Indonesia is to begin exporting sedans to Middle East countries,” said TMC managing officer Hiroyuki Fukui.

Last year, over 118,000 Toyota finished vehicles were exported from Indonesia, equal to 70% of all vehicle exports. Export countries include those in Asia, Africa, Latin America, and the Middle East. The company began exports of the Agya hatchback to the Philippines from Indonesia in January this year.