Toyota invests in UK plant but warns on post-Brexit tariffs 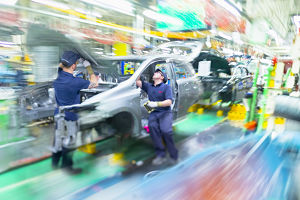 It is the latest new investment decision by a major carmaker following last year’s referendum in which the UK voted to leave the European single market and risk the prospect of significant tariffs with its largest trading partner.

Negotiations will begin later this year on the UK’s departure from Europe and Toyota warned that continued free trade was vital for the Burnaston facility.

Johan van Zyl, CEO of Toyota Motor Europe, said: “Our investment demonstrates that, as a company, we are doing all we can to raise the competitiveness of our Burnaston plant in Derbyshire.

“Continued tariff- and-barrier free market access between the UK and Europe that is predictable and uncomplicated will be vital for future success.”

Since the start of production in 1992, the plant has built more than four million vehicles. It was Toyota’s first centre for hybrid vehicle manufacturing in Europe.

Andy Winebloom, section manager for the UK production control kaizen team told Automotive Logistics last year that Toyota’s inbound supply chain to Burnaston is a mix of strong local supply in the UK, combined with an important flow of European and global parts.

He said about 80% of the factory’s needs by volume came from UK supply points, including engines from Deeside. The other 20% is from areas including Turkey, the EU and Japan. This does not reflect the value of these parts.

Toyota has launched a global programme to upgrade its manufacturing sites to produce TNGA-based vehicles. By 2020, the majority of the company’s global models will be built using the platform.

Toyota currently uses more than 100 uniquely modified platforms and sub-platforms, and 800 powertrains, including engines modified to fit those different platforms. But, with TNGA, just five layouts will be needed for the whole range, from compact sports cars to SUVs, says the company.

It is already used in the fourth generation Prius and the Toyota C-HR crossover, which is built in Turkey.

Starting this year, the Burnaston facility will be progressively upgraded with new equipment, technologies and systems, according to the carmaker, allowing for production under the TNGA platform.

A spokesman for Toyota declined to provide any further detail on the models to be built at Burnaston or the quantities involved.

The majority of production is exported, as the company sold less than 22,000 of the two brands of vehicles in the UK last year, according to its website.

PA Consulting Group this week estimated that the cost of a WTO tariff regime on UK exports to Europe in two years’ time, if the two have not reached a new agreement on trade, could result in the price of each exported vehicle rising by as much as £2,372.

“These manufacturing companies and suppliers may look to relocate their manufacturing back to the EU. The increased cost of exporting 200,000 cars per year could be £460m, which in two years would easily pay for the cost of a new plant in the EU area,” said the consultancy.

Toyota also has an engine plant in Deeside, Wales, where more than 200,000 units are manufactured each year. Outside of supplying engines to Burnaston, Deeside also supplies plants in Europe, South Africa, South America and Japan.

Last year the engine plant was chosen to manufacture hybrid engines for a future Toyota crossover model, which will be built in Turkey.

In October 2016, Nissan said it had picked its Sunderland plant in the UK to make the next model Qashqai as well as adding the X-Trail there, which is currently made exclusively in Japan.