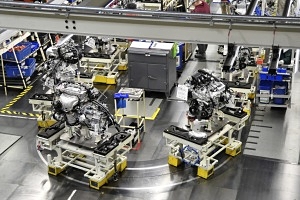 Carmaker Toyota has announced plans to invest $1.33 billion at its largest plant, Toyota Motor Manufacturing Kentucky (TMMK) in the US, as it prepares for a New Global Architecture (TNGA) production platform.

By 2020, the majority of the company’s global models will be built using the platform and upgrades are planned for its manufacturing sites to produce TNGA-based vehicles.

With the architecture, just five layouts will be needed for Toyota’s entire range, from compact sports cars to SUVs.

This compares with the more than 100 uniquely modified platforms and sub-platforms that it currently has, along with 800 powertrains, including engines modified to fit those different platforms.

The 2018 Toyota Camry will be the first vehicle produced in North America using the new architecture.

Outside of the TNGA-related investments the Kentucky facility will undergo other makeovers to “modernise and streamline the production process” said Toyota, adding: “That includes updating equipment and construction of an all-new paint shop.”

Last year the Kentucky plant produced more than 500,000 vehicles, more than a quarter of all of the vehicles the company produced in North America in 2016. The plant also has capacity to produce 600,000 engines annually.

The 750,000-plus sq.m facility is supplied by more than 350 parts and commodities supplier locations across the US.

In 2015, production of the Lexus ES 350 began in Kentucky after a $360m investment (of a total $530m). It was the first time Lexus vehicles were produced in the US. The Toyota Avalon brand is also produced at the plant.

“TNGA will allow TMMK to be a more flexible production environment, which will position the plant to compete globally for new models, build ever-better cars and respond quicker and more capably to market demands down the road,” said the company in a statement.

Jim Lentz, CEO of Toyota Motor North America said the $1.33 billion investment formed part of a $10 billion total spend planned for its 10 US based facilities over the next five years.