Toyota to export US-made Highlanders to the Antipodes and Russia 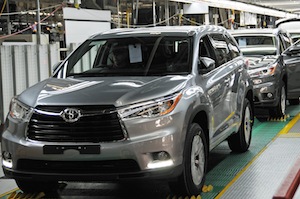 Toyota has started production of its 2014 model year Highlander SUV at the Princeton plant in Indiana, US and will be exporting models made there to Australia, New Zealand and Russia next year.

Toyota Motor Manufacturing, Indiana (TMMI) started production of the model on December 5, following a $430m expansion at the plant and the addition of 600 jobs. The first models will be petrol driven but the company intends to add a hybrid version next year. The plant also makes the Sequoia SUV and Sienna minivan, and has an annual production capacity of 350,000 vehicles. As a result of the Highlander exports, TMMI will increase production by 15,000 and raise TMMI’s annual capacity to 365,000 vehicles by late 2014.

Exports of the Highlander to Australia, New Zealand and Russia were formerly supplied from Japan.

“The all-new Highlander is a dynamic, stylish SUV and its quality craftsmanship, and the fact that it will be exported to the Russian and Australian markets, is a testament to the hard work and dedication of our team members,” said TMMI president Norm Bafunno. “This really is a milestone for our entire team.”

A spokesperson for GM told Automotive Logistics that volumes for Australia and New Zealand will be moved by rail provider Norfolk Southern to Dundalk Terminal at the port of Baltimore for onward ocean transport by Wallenius Wilhelmsen Logistics (WWL). VSA, a division of WWL, will handle the processing. Those shipments will got to seven ports in Australia and two in New Zealand.

“For Russia and related markets, we are shipping from Brunswick, Georgia to Toyota’s Zeebrugge, Belgium port facility, using our current Venza logistics partners for processing, IAP, and for ocean transportation, “K” Line,” said the spokesperson.

GM started exports of the Venza SUV, made at its Georgetown facility in Kentucky, to Russia and Ukraine in April this year.

As with the inland shipments to Baltimore, Norfolk Southern is supplying the rail service direct to Brunswick. (Venza volumes are taken by rail to Jacksonville and moved by truck to Brunswick).

“These are our first export only rail-direct routes,” said the spokesperson.

It is not the first time that the Princeton plant has exported vehicles to overseas markets. It began regular exports for the first time in 2011 with the Sienna when small annual volumes of around 600 began being shipped to South Korea.

Also, back in 2008, Toyota took the decision to export 15,000 unsold models of the Sequoia made at TMMI to the Middle East to relieve the build up of inventory across its dealer network. A small number of 150 were also shipped to South America with around 1,000 models of the Tundra produced at the San Antonio plant in Texas. At the time truck sales were down 35% in North America as the surge in fuel prices and economic downturn took their toll (read more here).