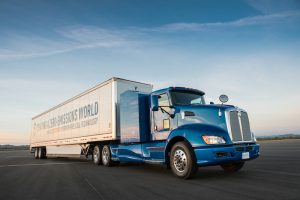 Toyota is using this summer to work out the feasibility of a hydrogen fuel cell system it has designed for heavy (class 8) truck use at the US west coast port of Los Angeles. The carmaker aims to move cargo in and out of the port without emissions using the hydrogen-powered truck.

The study will contribute to the port of LA’s Clean Air Action Plan, according to Toyota, which was set up in 2005 to target emissions from operations at the ports of LA and Long Beach.

Tier one engineering consultant, Ricardo, is providing technical assistance to Toyota throughout the project in the areas of design, vehicle build, testing and development, and is currently supporting vehicle trials.

Toyota said in a statement that the heavy-duty truck would have the power and torque capacity to conduct port drayage operations while emitting nothing but water vapour.

According to Ricardo, the truck generates more than 670hp from two Mirai fuel cell stacks and a 12kWh battery. The gross combined weight capacity is 80,000 lbs (36 metric tonnes) and its estimated driving range is more than 200 miles (322km) per fill, under normal drayage operation.

“As they did with the Prius and the Mirai, Toyota is taking a leap into the future of technology,” said Mary Nichols, chair of CARB. “By bringing this heavy-duty, zero-emission hydrogen fuel cell proof-of-concept truck to the port, Toyota has planted a flag that we hope many others will follow.”