Toyota will end production in Australia 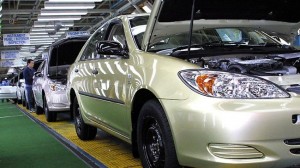 Toyota has announced it will stop building cars in Australia in 2017 and restrict its business to the national sales and distribution of imported models. It will mean the end of Camry, Camry Hybrid and Aurion production at the Altona plant near Melbourne, as well as the manufacturing of four cylinder engines, also at Altona, for fitment to locally made vehicles and for export to Thailand and Malaysia.

The company said that beyond 2017 it would import the Camry and Aurion vehicles, along with the entire range of Toyota passenger and commercial vehicles. A spokesperson for Toyota said that the company would provide information at a later date about from where those vehicles will be supplied.

Toyota was the last remaining major international OEM making vehicles in Australia to announce its intention to pull production out of the country.

"We did everything that we could to transform our business, but the reality is that there are too many factors beyond our control that make it unviable to build cars in Australia,” said Toyota Australia president and CEO, Max Yasuda. “Although the company has made profits in the past, our manufacturing operations have continued to be loss making despite our best efforts.”

GM and its Holden division made a similar announcement in December following an earlier decision to stop Opel distribution. And in May 2013 Ford announced it would stop production in October 2016. The appreciation of the Australian dollar and its impact on exports, high manufacturing and labour costs, and low economies of scale have all been cited as factors in the OEMs’ decision to withdraw.

However, these are not the only factors according to Vijayendra Rao, research director, APAC Automotive at business analyst Frost & Sullivan, who said that it was also down to the fact the carmakers were slow to adapt to new customer demand for small cars.

“Holden was still manufacturing the Commodore while Ford was manufacturing Falcon in Australia,” said Rao. “Yet customer demand for small cars was evident in 2011, with the Mazda 3 being the highest selling model in Australia toppling the Holden Commodore, the top selling model for the previous 15 years. Once this trend was evident, the local manufacturing was always going downhill and most of the small cars even from Holden and Ford were imported from other regions.

Australia’s many free trade agreements are also seen as a factor in the demise of local production. Agreements with countries including Thailand, Korea and Japan allowed carmakers to import vehicles at lower prices.

“An Australian-made car is US$ 3,400-4,000 more expensive than the same specs imported vehicles,” noted Rao. “This made local manufacturing non-competitive and the writing was always on the wall about the exit of local manufacturers from Australia.”

The impact on the local supply chain could affect as many as 50,000 jobs down through the tiers of parts suppliers. They now have two choices according to Rao: either diversify their manufacturing to other industries within Australia, such as construction, service or resources; or look for viable export markets for automotive parts.

“Most suppliers over the past few years have been looking at export markets, which include mainly Asia, due to the proximity of the region,” said Rao. “But it will be very hard to compete with suppliers from China and Korea mainly in terms of costs.

Instead it will be on the grounds of quality and cutting edge technology that Australian parts suppliers could compete with Asian rivals.

“It will be a hard road ahead for the local supplier industry but, as mentioned above, diversifying into different industries along with exploring the export markets would be the key focus areas of local suppliers in the coming years,” said Rao.