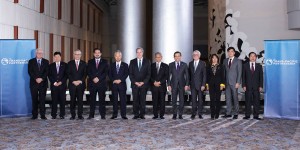 The biggest trade deal in decades was signed in Atlanta, in the US state of Georgia, on Monday this week when the 12 Pacific Rim countries that have been involved in Trans-Pacific Partnership (TPP) talks since 2010 finally came to an agreement.

“With today’s successful conclusion of the Trans-Pacific Partnership negotiations, the United States and 11 other nations have taken a critical step forward in strengthening our economic ties and deepening our strategic relationships in the Asia-Pacific region,” said US secretary of state, John Kerry.

The TPP is a trade agreement that covers a number of areas of economic policy, including lower trade barriers, a common framework for intellectual property, labour and environmental law, and an effort to establish an investor-state dispute settlement mechanism. It involves the US, Canada, Mexico, Chile, Peru, Australia, New Zealand, Brunei, Malaysia, Singapore, Vietnam and Japan.

The agreement covers around 40% of the world’s economy and, in automotive terms, covers 27m units of light vehicle production as of 2014, according to PwC Autofacts.

Negotiations over the past five years have been difficult and, in relation to the automotive sector, there have been disagreements on a number of issues, including rules of parts and content origins.

Lower trade barriers are a key item of the deal in relation to the automotive industry, not least between the US and Japan. The deal will lower US tariffs on light vehicles while also opening Japan’s market to US built vehicles. According to PwC Autofacts, Japan alone shipped 2.1m units in 2014 to other TPP markets, or about half of its total light vehicle exports, including 1.5m units going to the US.

The latest deal aims to phase out US import tariffs of 2.5% on passenger cars over a 25-year period, though the existing 25% levy on trucks and commercial vans will remain in place for 30 years.

It may seem a threat to US carmakers that further vehicle models built in Japan or Asia could enter the market. However, Japanese carmakers have strong production networks in North America, including for pickup trucks, covering more than 70% of the brands’ sales in the US. According to PwC, that strategy is not likely to change in the long term, despite a recent trend to move some production back to Japan because of the weakened yen. The analyst forecasts Japanese production in NAFTA to rise from 5.9m units last year to 6.7m in 2021.

Currently, NAFTA requires a 62.5% minimum procurement rate between the US, Canada and Mexico for a vehicle to move within the trade area free of light vehicle duties, but there are proposals to increase this requirement across the 12 TPP members. PwC points out that this rate would be problematic for carmakers with a high rate of content from non-TPP countries such as Thailand or Korea. Mexico is looking for a local content threshold of 65% for TPP countries, whereas Japan, whose carmakers have significant supply bases in Thailand, is aiming lower at around 50%.

The rules discussed in Atlanta would lower the local content requirement to 45% across TPP, as opposed to the NAFTA requirement of 62.5%.

Automotive complications
While the TPP deal has officially been signed, measures still need to be ratified by lawmakers in each country.

The history of recent trade negotiations sends mixed signals in predicting the outcome of free trade agreements such as the TPP. Globally ambitious projects, such as the Doha Round negotiations, have tended to collapse under their own weight. Stitching together big economies has proved elusive; talks aimed at establishing an economic partnership agreement between the EU and Japan have gone through eight rounds without resolution. Ideas for US and EU agreements have been discussed on and off for 25 years. On the other hand, bilateral agreements between medium-sized economies and large ones, such as EU agreements with Morocco, Canada or Mexico, or those made by South Korea with the US and Europe, have been more successful.

The automotive industry plays a complicated role in such agreements – and their failure. Industry experts on either side of the Atlantic or Pacific generally support the deals as advantageous for the sector, as they can lead to lower vehicle and parts prices, and increased productivity in factories. Logistics executives at carmakers, shipping and transport companies, perhaps unsurprisingly, tend to support the deals as fillips for open trade.

Read more about the implications for global trade agreements on the automotive industry in the latest edition of Automotive Logistics magazine.