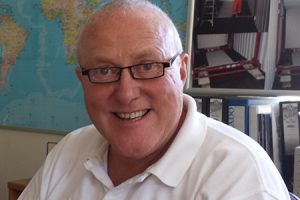 Trans-rak International is benefitting from the rise in containerised finished vehicle shipments to new and emerging markets with a reported 20% increase in sales of its in-container racking system for the first six months of the year.

While the company would not comment on additional production volumes of the R-Rak cassette system or the increase in revenue from the sales, it did confirm that the rise in demand had led it to invest in an additional production line at its factory in China, based at the HPCL container manufacturing facility owned by Singamas in Guangdong.

“For traditional markets such as Europe and the US, ro-ro remains the preferred option. However, when vehicles are being transported into regions such as Asia, Russia and South America, shipping cars in containers is becoming increasingly popular,” said Paul Donaldson (pictured), managing director of Trans-rak. “Where there are long hinterland journeys involved, with poor infrastructure and/or concerns about security, containerising cars is the clear solution. It’s flexible from an intermodal point of view, with no direct handling of vehicles once loaded, so damage is lower and, of course, the vehicles are secure.”

Trans-rak said that that luxury carmakers such as BMW were opting to move more vehicles in containers by road and rail, including along the Silk Road route between Europe and China, leading to a “dramatic rise” in demand for its removable R-Rak cassette system that fits vehicles into containers.

Donaldson added that while Europe to China was a major route that highlighted increased demand for the product, the company was also seeing increased demand from Russia, Indonesia, North and South America, and Malaysia.

“We are working around the clock to meet customer orders and confidently predict continued growth as OEMs build market share in new regions and the trend towards containerisation gathers momentum,” said Donaldson. “Trans-rak is well on course to achieve its best year results yet.”