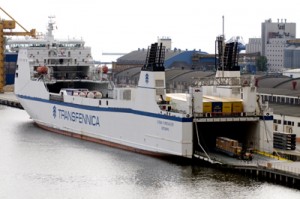 Transfennica has said it will end its ro-ro service between Spain and Holland via the UK at the end of this year because of upcoming legislation governing sulphur emission control areas (SECAs) in the waters around northern Europe.

The route, between the ports of Bilbao (Spain), Portsmouth (UK) and Zeebrugge (Belgium) was started in 2007. It has seen a steady rise in volumes since then according to the company, including for automotive products. However, it stated that the upcoming SECA legislation, which goes into effect on January 1st 2015, will increase costs because of the higher price of low sulphur fuel.

From January 2015, the sulphur content of bunker fuel in the North and Baltic Seas, as well as the English Channel, will be restricted to 0.10% m/m. Without an abatement system on board the vessels (or some other alternative) the price of the more expensive marine diesel or gas oil is expected to increase considerably. According to Finland’s Ministry of Transport and Communications the cost of fuel oil with a 0.1% sulphur content is between 73% and 85% more expensive than current heavy fuel oil.

As a consequence Transfennica anticipates that up to 50% of the trailer volumes currently using the service would return to the road. The board of directors of Spliethoff Group, which owns Transfennica, have therefore said there is no profitable future for a ro-ro service on the route.

However, the company said there would be no impact on other Transfennica routes nor on the activities of Transfennica Logistics, which would continue its intermodal activity to and from Spain and Portugal.

In addition to the existing service, in May this year Transfennica began a twice-weekly direct call to Portsmouth from Bilbao, with an onward call to Zeebrugge. That service moves truck and containerised freight but is also suited for high and heavy, mafi and project cargo. Transfennica did not reveal how this service was affected.

In a statement the company said that it would continue its present lo-lo service offering Tuesday and Friday departures from Rotterdam, Tilbury and Bilbao.

Added to that, Transfennica Logistics said it would increase the use of rail services to and from the Barcelona and Madrid areas by opening a second warehouse and office in Barcelona in January 2015.

This latest end of service announcement follows DFDS’ decision earlier this year to end its service between Harwich in the UK and Esbjerg in Denmark.

“[U]nfortunately we haven't been able to reduce costs enough to enable the route to bear the very high additional costs of around £2m [$3.1m] a year," said DFDS’ CEO Niels Smedegaard. "This is what the new environmental law and the requirement to use low-sulphur oil will cost based on current oil prices from 1 January 2015.”