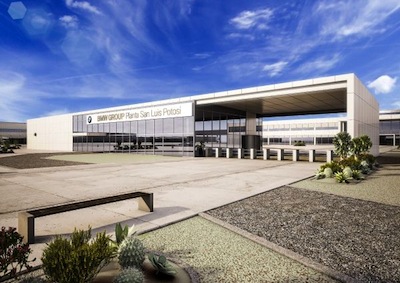 US-president elect Donald Trump has turned his criticism of carmakers importing vehicles to the country from Mexico on BMW. As with Ford, GM and Toyota, Trump has threatened BMW with an import tax of 35% should it move vehicles to the US from its planned new plant in San Luis Potosi, which is due to open in 2019.

Trump also cast his trade criticism of the automotive supply chain wider than North America. He congratulated the UK for voting to leave the European Union, which he described as a vehicle for Germany and something to which he was largely indifferent, predicting other countries would leave it. He also described automotive trade between the US and Germany (as part of the wider EU) as “unfair” and a “one-way street”.

The German carmaker has since said it would keep to its plans for the Mexican plant, although acknowledged that it could revise shipment plans and destinations for the plants if necessary.

Trump held an interview earlier this week with Kai Diekmann, former chief editor of the German newspaper Bild, and British member of parliament, Michael Gove, a prominent campaigner to leave the EU who was representing The Times newspaper.

In the interview, Trump said that BMW could expect to face a 35% import tax on vehicles if it imported cars from Mexico. Production at the San Luis Potosi plant in 2019 will begin with a 3-series model for global distribution to supplement output in Germany and China. Based on comments made by BMW’s manager for logistics at last year’s Automotive Logistics Mexico conference, the carmaker had planned that more than 60% of the new plant’s capacity would go to the US.

Trump, however, has kept up his strong criticism of carmakers’ use of Mexico as an export base to the US.

“I would tell BMW if they think they are going to build a plant in Mexico and sell cars in the US without a 35% tax, it’s not going to happen,” Trump said, adding that the company should build the plant in the US because they would benefit from a lower corporate tax rate. Trump has pledged to lower corporate tax to between 15-20%.

BMW has responded to say that it is already a major manufacturer in US. Its plant in Spartanburg, South Carolina produced around 411,000 units in 2016, making it the largest BMW plant globally. “Around 70% of the vehicles built there are exported, helping us and South Carolina to be among the largest exporters from the US,” BMW’s spokesperson for the production network, Hanns Huber, told Automotive Logistics.

Moreover, Germany automotive manufacturers have quadrupled US production since 2009 from 214,000 units to 850,000 according to Germany’s automotive industry association, the VDA. In support of that, German suppliers have trebled the number of their US facilities during the past 20 years to over 430 – the greatest increase in any region of the world, according to the VDA’s president Matthias Wissmann. “That is a clear commitment to the US as an industrial location!” he told a press conference in Detroit.

Europe’s one-way streetRegarding BMW’s original plans for exports from Mexico, BMW’s board member, Dr Ian Robertson, told the Financial Times this week that the plant could survive without exporting most of its output to the US.

BMW’s CEO, Harald Krüger, also said that the company still had time to adjust plans before 2019, raising the question of whether it could adjust production and supply chain plans if Trump were to install tariff barriers. According to Huber, “adjustment is part of [BMW’s] daily business, especially in logistics”.

“We adjust whether it is because of markets, tax changes, environmental or weather conditions,” he told Automotive Logistics. “If you recall, a few years ago Brazil [was changing] its rules from one day to the next and imposed import tariffs, so we had to adjust.”

Trump may seek adjustment on an even wider scale, including a more equitable trade policy between the US and Germany. While recognising Germany’s strength as “a great manufacturing country” that exported brands that were popular in the US he pointed out that there was an imbalance in the import and export of vehicles between the two countries.

“You go down Fifth Avenue, everybody has a Mercedes-Benz in front of their building, right? How many Chevrolets do you see in Germany? Not many, maybe none, you don’t see anything at all over there. It’s a one-way street,” he said.

According to the VDA, German manufacturers remain especially strong in premium passenger cars and premium CUVs, taking a market share in the US market of over 40% in both segments.

In Germany, meanwhile, American carmakers have a strong presence in the market and manufacturing through Ford and GM’s Opel unit, though neither import many cars built in the US. GM withdrew sales of Chevrolet in 2015 from Western Europe to better use capacity at its Opel division there; most Chevrolets sold in Europe were built in South Korea.

Trump’s comment on trade may raise some questions over terms between the US and EU. Currently, import tariffs from the EU to the US are lower than in the other direction for finished vehicles. The US import tariff for cars from the EU is 2.5% (though 25% for pick up trucks); to the EU from the US it is 10%. Balancing that to some extent was going to be one of the goals of the TTIP trade deal between the US and EU but that deal appears to have been derailed.

According to Wissmann one thing is clear: “The US is a very important market for the German automotive industry, and conversely vehicle production in the US is also dependent on exports”.

Wissmann said the automotive industries in both the US and Germany had expressed their support for a trade agreement that has fewer non-tariff trade barriers and eliminates import duties as far as possible.

However, Trump’s comments on the EU reflect indifference if not an antagonism to it as a trading bloc.

Asked whether a strong European Union or stronger individual nation states were better for trade with the US he said he did not care whether the region was “separate or together”, though he indicated it was originally formed in part to beat the US on trade.