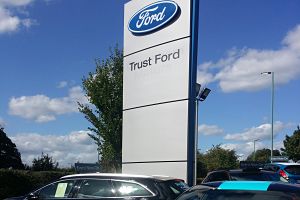 TrustFord, the world’s largest dedicated Ford dealer group with 65 branches in the UK, has announced a significant expansion of its Long Marston fleet distribution site in Warwickshire.

The site will expand from 7 acres to 22.5 acres and will have capacity for around 7,000 vehicles, the intention being to make it a national fleet hub.

It will also have a number of improved facilities, including a comprehensive bodyshop facility and state-of-the-art video and photographic facilities for used vehicles.

Once the expansion of the site is complete, TrustFord expects to complete 30,000 pre-delivery inspections a year, with a focus on preparing fleet vehicles and distributing them across the UK from the site.

Around 3,000 used commercial vehicles will also be refurbished per year at the site for onward sale through the group’s Transit Centres around the country.

Ford wholly owns TrustFord, and the name is a 2014 rebranding consigning to history brands like Dagenham Motors, Polar Ford, and Brunel Ford.