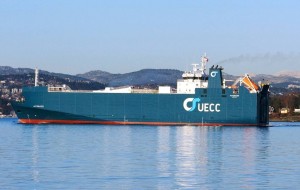 European short-sea ro-ro operator UECC has been forced to take its vessel M/V Autoracer out of service and send it for recycling. According to its CEO, Glenn Edvardsen, its removal was not because of low volumes but down to historically low freight rates on short sea voyages, a situation worsened by the simultaneous rise in operating costs. It means the M/V Autoracer could be followed by other vessels in its class. Edvardsen told Automotive Logistics that the company was seriously considering removing more vessels from the market.

“Our challenge is not to fill the vessels, they are loaded at full utilization, but the profit margin, if there is any at all, is so marginal with the low rates,” said Edvardsen. “There are, of course, still some niche trades that make sense for vessels of this size to operate in, but the rates needs to be increased.”

Port costs, including labour, docking fees and stevedoring expenditure are just three areas where costs have increased and rates have not increased in line with them since the downturn in 2008. Edvardsen pointed to the situation at the recently privatized port of Derince in Turkey as an example of where operating costs have increased dramatically, as much as 450% in that case. In general, however, the rates increase figure for Western Europe is around 50%.

“We are of course fighting back on this, but again, the freight rates needs to be increased to cover for the increased operating costs,” said Edvardsen.

The reason rates have remained low since the financial crisis is in part down to over tonnage in the market. As Edvardsen pointed out, car sales in Western Europe were at a 30-year low last year and as a consequence of over capacity in the market rates were kept low, but he recognized that there was now a tightening up as volumes increase. That, combined with the fact that UECC is taking out tonnage from the short sea market, is now putting pressure on the low rate situation.

But it is not just about taking tonnage out. UECC is at the same time investing in bigger vessels. The company already has two new build PCTCs on order, each with a 3,800 rt capacity, which will be delivered in the second half of next year. Those vessels will replace four older vessels in UECC’s fleet. They are capable of being fuelled with LNG and will trade in the Baltic, being designated Super Ice Class 1. They also have a high level of flexibility in terms of loading diverse freight along with passenger vehicles, including high and heavy equipment and breakbulk cargo. However, Edvardsen made the point that, while this sort of investment was part of a robust long term strategy, the company needed to see an increase in rates to justify the cost.

Built at the Aker Yard at Brattvaag, Norway and delivered to UECC in 1994, the M/V Autoracer was the largest vessel in the company’s fleet when it went into service. It is estimated to have carried more than 1,600,000 vehicles during its lifetime but is now being recycled at the Fornaes Yard in Denmark.